Paco and George crammed all the content so you don’t have to! We rant. We review. We recommend. What you watch is up to you!

CAN’T GET YOU OUT OF MY HEAD: AN EMOTIONAL HISTORY OF THE MODERN WORLD (Part 1 Bloodshed on Wolf Mountain) (2021) dir. Adam Curtis

It’s a crossover episode with our friends from the FilmDrunk Frotcast.

Vince Mancini is Senior Film and Culture writer for FilmDrunk and has been a guest on Sup Doc before (Episode 57).

Matt Lieb is a comedian and writer for Newsbroke, and he was actually our very first guest on Sup Doc (Episode 1).

This is a fun and loose conversation. We review a few docs: like Lance Oppenheim’s debut documentary, Some Kind of Heaven, The Tiger Woods docuseries TIGER on HBO, and Derek DelGaudio’s In and Of Itself, as well as a look at the Golden Globe Nominations.

We are very pleased to be collaborating with Moviepassed, who have been putting on streaming programs and encouraging donation to charities all throughout the pandemic.

They have guest curators so Paco, George, and Will selected some of their favorite documentaries to stream via twitch on Monday March 1st!

It will be our first live watch-along event.

You don’t need a Twitch account to watch along (you do need a login to join the chat).

If you’ve never seen Cane Toads: An Unnatural History, a “Secret Feature”, Memorial Day 2000, Nothing So Strange, Marjoe, Marwencol, or Home Movie, this is the at-home weekday filmfest for you!
Screening starts at  3pm PST (11 PM GMT). Follow Moviepassed on instagram for the schedule!

We’d like to use this as an opportunity to promote fundraising for No Us Without You, a non-profit that is directly feeding back-0f-house food workers in Los Angeles who were not eligible for stimulus payments.

Paco and George review and recommend (or not) new documentaries in the streaming world.

BIOPICS: Mank, Professor and the Madman, The Crown, Get On Up

The gang covers Jessica Yu’s 2004 documentary In the Realms of the Unreal. Utilizing innovative animation and voiceovers, Yu pieces together the story of Chicago janitor Henry Darger, a loner who has a fascinating and intense creative output that is discovered by his landlords upon his death. Paco and George visit with comedian and game master Jared Logan to discuss the sad and surprising life of Henry Darger, the Chicago loner whose exhaustive creative work was discovered posthumously.

The ultimate Outsider Artist, Darger created a memoir, a 15,000 page hand-written novel, and giant ten foot paintings, none of which were intended for an audience. The private world he created was fascinating, horrific, and ultimately influential beyond his lifetime.

Jared Logan is a writer and performer whose comedy albums My Brave Battle and The Twilight Door are available to stream. He is also the game master of Stream of Blood, a thrice-weekly tabletop roleplaying game experience on Twitch. 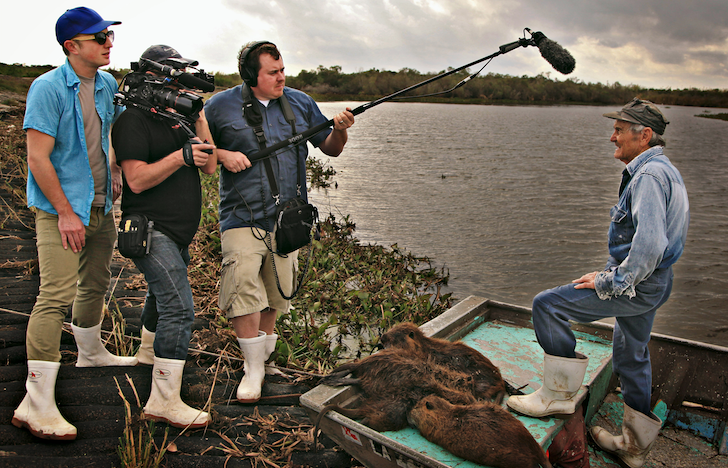 On episode 163 host George Chen talk with a team of filmmakers who specialize in outsider Americana documentaries. The three co-directors of Rodents Of Unusual Size share their road to the bayou via country music videos, bringing the humanity to environmental stories, and what parasites to watch out for. We also discuss their other feature Everyday Sunshine: The Story of Fishbone, and Plagues & Pleasures On the Salton Sea.

CHRIS METZLER (Co-Director/Producer)
After graduating from USC with a degree in business and cinema, Metzler’s film career has taken him from the depths of agency work, to coordinating post-production for awful American movies seen late at night in Belgium. His film directing and producing work has resulted in frequent partnerships with Jeff Springer, where together they’ve criss-crossed the country with the aid of caffeinated beverages and made their way in the Nashville country and Christian music video industries, before finally forsaking their souls to commercial LA rock n’ roll. These misadventures evening culminated in them winning a Billboard Magazine Music Video Award.

He eventually joined the independent documentary film scene to start work on his feature length directorial debut with Jeff Springer – the offbeat environmental documentary, PLAGUES & PLEASURES ON THE SALTON SEA, which was narrated by legendary counterculture filmmaker and “King of Trash” John Waters. The film went on to win over 37 awards for Best Documentary and was named by Booklist as one of its Top 10 Environmental Films. A cult favorite, the film was released theatrically in the United States and broadcast nationally on the Sundance Channel.

JEFF SPRINGER (Co-Director/Cinematographer)
Jeff Springer was born in an abandoned town in the California desert, raised in Hawaii, and educated at USC Film School. After working at a dilapidated film studio in Russia, he returned to Los Angeles and began editing cheesy (but action packed) promos for NBC, Paramount, Warner Bros and Capitol Records. After moving to San Francisco, he found himself on Lucasfilm’s Skywalker Ranch, editing behind-the-scenes documentaries for a not-very-well received science fiction prequel.

Craving the unexpected, he directed his first feature documentary PLAGUES & PLEASURES ON THE SALTON SEA with Chris Metzler, about the off-beat residents, environmental disasters and flooded towns surrounding California’s Salton Sea. The film went on to screen at 200 film festivals worldwide, won 37 awards for Best Documentary.

After working in London and Berlin, Springer has gone on to make numerous documentaries, including photographing and editing EVERYDAY SUNSHINE: THE STORY OF FISHBONE for PBS, which was narrated by actor Laurence Fishburne. He then lived in Afghanistan to edit the documentary IN-JUSTICE, about women imprisoned for supposed “moral crimes.” Recently he directed and photographed several short docs and an Emmy-nominated hour-long special for the show ARTBOUND for KCET in Los Angeles.

QUINN COSTELLO (Co-Director/Editor)
Quinn Costello is remarkably unequipped to live off the land for having grown up in rural Idaho. After exhibiting no ability to hunt he fled to study film at a hippie college in Olympia, Washington, only to find himself years later making a film about hunters.

After relocating to the Bay Area, Quinn began editing documentaries on subjects ranging from environmental justice, sacred islands and dancing spiders. His portfolio of work has been seen on PBS, The Learning Channel, Sundance Channel and innumerable film festivals including Tribeca and Mountainfilm in Telluride. For the past ten years he has been editing the Emmy award winning Public Television series THE NEW ENVIRONMENTALISTS narrated by Robert Redford. RODENTS OF UNUSUAL SIZE is his feature length directorial debut.

On episode 162 Paco and George play a few moments from some of their favorite interviews with great documentary directors. They talk about why they picked these clips and give a little perspective on interview.

If you want to hear the full episode click on the links below:

Ep 160 – Jeff Feuerzeig director of The Devil and Daniel Johnston

On episode 161 George and Paco sit down with musician and journalist Kevin Seal to recap Alex Winter’s 2020 documentary Zappa. On this episode we have three different Frank Zappa fans ranging from George, who is new to Zappa’s music, to Kevin, who loves Zappa but occasionally needs a break to Paco, who has been a life long Zappa-head. We get into many topics including: would Zappa be a Trumper, our collective love of Ruth Underwood, Steve Vai’s audition, how art should be a threat to the establishment, Gail Zappa, being an archivist, Captain Beefheart, Edgard Varèse and much more!

Frank Zappa – you either love him or hate him. There is no in between. There have been a few Zappa documentaries out in the last few years but this time it would seem that Alex Winter is a fan first and filmmaker second.  “Zappa” is a six-years-in-the-making love letter. Alex was given the family’s blessing and access to the prolific musician’s personal vault and he used as much as he could. We are privy to rarely seen and heard music, films, home movies and interviews up to the point of being just a few months before Zappa’s death in 1993.

Kevin has been writing and recording unfashionable music since the ’90s. His band Griddle released four studio records, including a concept album about Olympic athletes and cannibalism. He has played and sung on albums by 20 Minute Loop, Michael Zapruder, and more. Since the shelter-at-home began, he has co-hosted a music game show called Lo Fidelity. He grew up in Cincinnati.