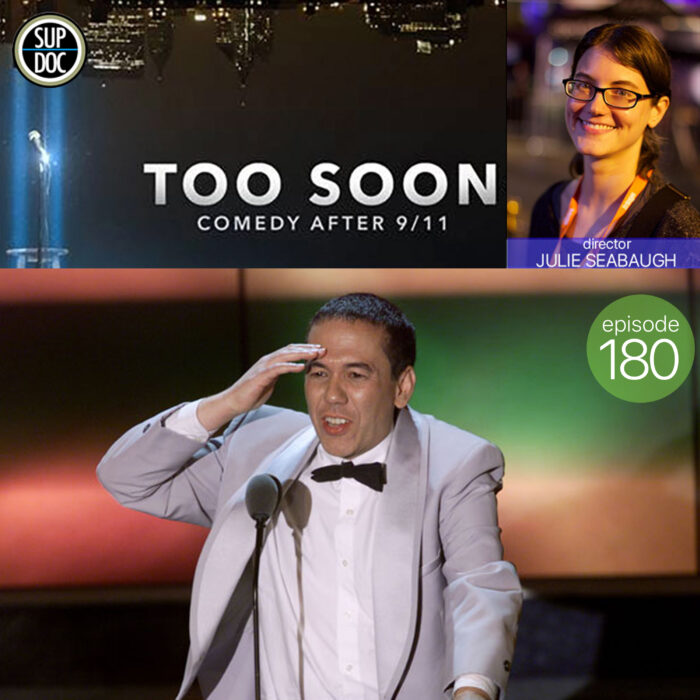 Ep 180 TOO SOON: COMEDY AFTER 9/11 with director Julie Seabaugh

On Ep 180 of Sup Doc, we review the documentary Too Soon: Comedy After 9/11 which you can catch on Vice TV on Sept. 8th, just a few days before the 20th anniversary of the 2001 attacks. The documentary features interviews with comedians including David Cross, Gilbert Godfried, Janeane Garofolo, and Marc Maron about the struggle to re-establish humor’s place in the aftermath of the attacks that day. The film explores how stand-up comedians, Broadway performers, late-night hosts, and “Saturday Night Live” helped audiences laugh even in the darkest of days. Our guest today is Julie Seabaugh the director, executive producer, and story editor of Too Soon: Comedy After 9/11.

NOTE: (VICE TV is available via all major satellite and cable providers and the VICE TV app via iOS, Android, Apple TV, Roku, and Chromecast.)

Julie Seabaugh grew up on a farm in rural Missouri and discovered stand-up when Dave Attell performed during her senior year of college. Way back in 2003, she founded and edited the criminally ahead of its time print and online comedy magazine Two Drink Minimum. Now the only full-time freelance comedy journalist in the United States, she’s contributed to The New York Times, Rolling Stone, The Hollywood Reporter, GQ, Variety, The A.V. Club, The Village Voice, The Huffington Post, Spin, Playboy, Vulture, Paste, Time Out New York, Time Out Chicago, and numerous other alt-weeklies.

Seabaugh’s coverage of modern roasting culminated in the 2018 book Ringside at Roast Battle: The First Five Years of L.A.’s Fight Club for Comedians, and her love of Mitch Hedberg led to producing/hosting 2020’s Hope on Top: A Mitch Hedberg Oral History for SiriusXM’s Comedy Central Channel (available to stream via the SiriusXM app). With Emmy-nominated director and editor Nick Scown, she is currently producing the documentary Too Soon: The Comedy of 9/11. Participants include David Cross, Janeane Garofalo, Gilbert Gottfried, Lewis Black, Darrell Hammond, Doug Stanhope, and Marc Maron; the film’s 2021 release will mark the twentieth anniversary of the attacks.

Having previously served as A&E staff writer at Las Vegas Weekly, Seabaugh won a 2015 Nevada Press Association Award for a cover profile tracing the downward health spiral of The Amazing Johnathan. “It’s obvious the author is a wordsmith,” judges wrote. “Every sentence is well thought out. It’s full of lively adjectives and truly paints a picture of what the Amazing Johnathan looks like, what he’s experiencing and how he got to his current state. I felt like he was sitting next to me, boisterously telling his story.”