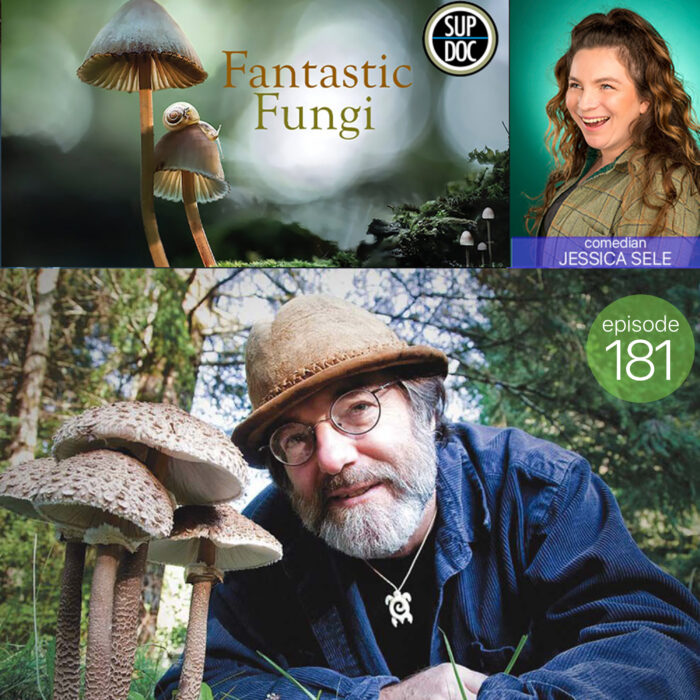 We’re discussing Fantastic Fungi (2019), directed by Louie Schwartzberg. We look at all the forms of fungi, the roles they play in recycling matter, communicating with the trees, and even their role in human evolution. You may never look at mold the same way again. Our guest for this episode is comedian Jessica Sele.

Fantastic Fungi is a consciousness-shifting film about the mycelium network that takes us on an immersive journey through time and scale into the magical earth beneath our feet, an underground network that can heal and save our planet. Through the eyes of renowned scientists and mycologists like Paul Stamets, best-selling authors like Michael Pollan, Eugenia Bone, Andrew Weil and others, we become aware of the beauty, intelligence and solutions that fungi kingdom offers in response to some of our most pressing medical, therapeutic, and environmental challenges.

Jessica Sele is a Los Angeles-based comedian whose teeth were cut sharply in the San Francisco Bay Area. Her material ranges from sexuality to substance abuse to living in the end times. Her performances leave audiences to feel that demons have just left their bodies to take the night off. She hosts the West LA comedy night at Giant Robot, as well as the podcast, “Hot Topic: Jessica Sele talks about climate change for some reason.” Jessica has performed on Viceland, is a regular feature at her home club the San Francisco Punch Line, and has performed at fancy comedy festivals, colleges, clubs, and alt shows across the nation.