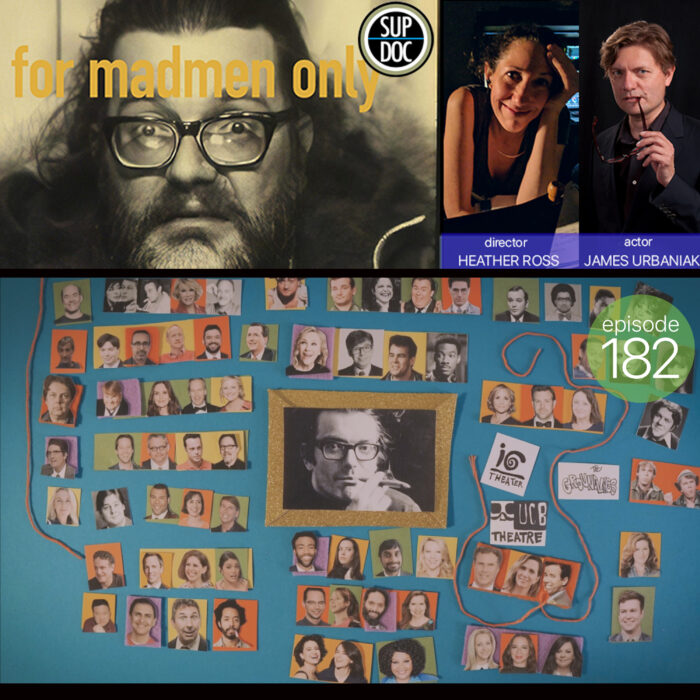 Paco and George talk to the director of For Madmen Only: The Stories of Del Close Heather Ross, and actor James Urbaniak. This documentary is currently streaming on Amazon, Google Play and AppleTV and premieres on Hulu later this fall. For Madmen Only is an intimate look at the tremendously influential comedy and improv guru Del Close and is an eye-opener for anyone unfamiliar with this improv family tree that includes: Jon Glaser, Rachel Dratch, Dan Aykroyd, John Belushi, Tina Fey, Vince Vaughn, Bob Odenkirk, Adam McKay, Amy Poehler, Elaine May, and Bill Murray. It’s crazy how many comedy stars were his students! Check out a partial list here.

This is a great conversation that moves from comedy, mental illness, improv, drugs, seekers vs oracles, comic books, music and much more!

Heather Ross is an Emmy winning director & producer. She directed the documentaries For Madmen Only and Girls on the Wall as well as directing and producing for HBO, NBC, Fox, Discovery, A&E and more.

James Urbaniak has starred in a series of films by Hal Hartley starting with Henry Fool, plays Dr. Venture on The Venture Brothers, was a regular on Difficult People and Review. He also hosts the podcast Getting On With James Urbaniak.