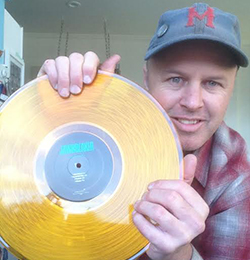 In the early 1990s the seminal punk band Jawbreaker went on tour with Nirvana. We sat down with the drummer of Jawbreaker, Adam Pfahler, to talk about Montage of Heck and his experience meeting and playing with Nirvana and Kurt Cobain. In our podcast we mention that we recorded this episode before the article on TalkHouse written by Melvins front man Buzz Osbourne was published. We definitely would have discussed it with Adam had it come out before our recording. If you want to read what Buzz had to say about the documentary Kurt Cobain: Montage of Heck you can read it here.
Kurt Cobain: Montage of Heck, also billed as Cobain: Montage of Heck, is a documentary film about Nirvana front man and ’90s rock icon Kurt Cobain, which premiered at the 2015 Sundance Film Festival. It has received a limited theatrical release worldwide and premiered on television in the United States on HBO on May 4, 2015.

The documentary is directed by Brett Morgen who began work on it in 2007 when Cobain’s widow, Courtney Love, approached him with the idea. It is the first documentary about Kurt Cobain to be made with the cooperation of his family. Morgen and his team were given access to the entirety of Cobain’s personal and family archives. The documentary includes footage from various Nirvana performances and unheard songs, as well as unreleased home movies, recordings, artwork, photography, journals, demos, and songbooks. Morgen used the interviews in the film Lenny as a model for the interviews in the film. The film’s title, Montage of Heck, takes its name from a musical collage that was created by Cobain with a 4-track cassette recorder in about 1988, of which there are two versions; one is about thirty-six minutes long and the other about eight minutes long. Several of the film’s scenes were animated by Stefan Nadelman and Hisko Hulsing. Jeff Danna wrote an original score for the film.[8] The film was co-produced by HBO Documentary Films and Universal Pictures International Entertainment Content Group. Cobain and Courtney Love’s only daughter, Frances Bean Cobain, was a co-executive producer on the film.

Jawbreaker was an American punk rock band active from 1986 to 1996 and considered one of the most influential acts of the early-1990s emomovement. Lead vocalist and guitarist Blake Schwarzenbach, bassist Chris Bauermeister, and drummer Adam Pfahler formed the band while students at New York University, later relocating to Los Angeles where they released their debut album Unfun (1990) through independent record label Shredder Records. Relocating again to San Francisco the following year, they released 1992’s Bivouac through the Tupelo Recording Company and The Communion Label. Schwarzenbach’s charisma and personal, frustrated lyrics helped to establish him as a cult idol, even as he underwent surgery to remove painful and voice-threatening polyps from his throat. Jawbreaker toured with Nirvana in 1993 and released 24 Hour Revenge Therapy in 1994, attracting the attention of major labels. They signed a $1 million contract with DGC Records and released 1995’sDear You, but the album’s polished production and smooth vocals resulted in a significant backlash from the band’s core audience. Internal tensions led to Jawbreaker’s dissolution in 1996.

Following the breakup, the members of Jawbreaker were active in other projects including Jets to Brazil and Whysall Lane. Pfahler continued to issue previously-recorded Jawbreaker material through his Blackball Records label, and public interest in the band continued due in part to nationally-charting pop punk and emo acts openly indebted to Jawbreaker’s sound. In 2004 Pfahler licensed the out-of-print Dear You from DGC’s parent company Geffen Records and re-released it to positive response. He has since issued a remastered version of Unfun, and plans to remaster the rest of the band’s catalog. In 2007 Jawbreaker briefly reunited in the studio during the recording of a documentary about the band. That film finally came out after the death of producer Keith Schieron under the title Don’t Break Down.

In 2017 Jawbreaker played their first reunion shows in nearly 20 years!