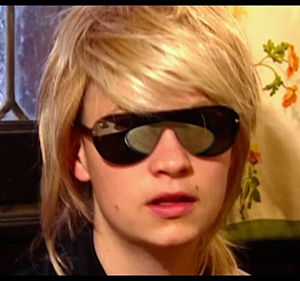 Ep 24 THE CULT OF JT LEROY with director Marjorie Sturm

Ep 24 THE CULT OF JT LEROY with director Marjorie Sturm

On EP 24 Paco and George talk with filmmaker Marjorie Sturm about her documentary The Cult of JT Leroy. We talk about JT Leroy’s first two novels Sarah and The Heart Is Deceitful Above All Things and we get into hero worship, cons, Rachel Dolezal, improvisation, filmmaking and much more. Authorized and unauthorized, The Cult of JT Leroy received two Jury Awards for Best Feature Documentary (SF IndieFest and Oslo/Fusion International) in 2015 and played at top-tier festivals around the world. Ethically charged, controversial, and confusing, JT’s life and death sprang open a Pandora’s box of powerful questions about literature and culture, identity and celebrity, and the reality of the society we live in. Fraud? Art? Sociopathy? Complicity? The Cult of JT Leroy is a testament to this bizarre and elaborate story that has captured the attention of the world’s media and perplexes to this day. Jeremiah “Terminator” LeRoy was a literary persona created in 1994 by American writer Laura Albert. LeRoy was supposedly born October 31, 1980 in West Virginia. His backstory was one of prostitution, drug addiction, and vagrancy in California. After his first novel Sarah was published, “LeRoy” started making public appearances. A January 2006 article in The New York Times declared that the person acting as LeRoy in public was Albert’s sister-in-law, Savannah Knoop. Knoop wrote her own memoir of the experience called Girl Boy Girl. An Albert-endorsed documentary by Jeff Feuerzeig, Author: The JT LeRoy Story, premiered at Sundance 2016.

Marjorie Sturm is an award-winning filmmaker whose films span a broad perspective: narrative, documentary, and experimental. She was an interviewer, cinematographer, and Bay Area media wrangler for the 99%-Occupy Wall Street Collaborative Film which premiered at Sundance in 2013. She received the Grand Festival Award at Berkeley Video and Film Festival for her short narrative “Smoke the Pipe Dream.” Sturm has created social activism videos for Consumers Union and worked as a social worker with the mentally ill homeless in San Francisco’s Tenderloin district. Sturm studied Psychology at the University of Michigan, and received her MFA in Cinema from San Francisco State University. She is the younger sibling of the graphic novelist James Sturm and the painter/photographer Ilona Sturm. Sturm lives in San Francisco with composer Ernesto Diaz-Infante and their two children.