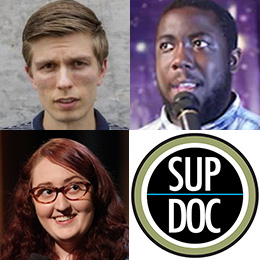 For our first SF Sketchfest live show, we had a fun panel to watch Heavy Metal Parking Lot (1986) and Neil Diamond Parking Lot (1996), short documentaries by Jeff Krulik and John Heyn. They document two very different sets of music fans in Landover, Maryland a decade apart. HMPL achieved cult status from its beginnings as a cable access doc, circulating on VHS and finally receiving a DVD release in 2006. Our esteemed panel of Emily Heller, Chris Thayer, and David Gborie wax nostalgic and relive teenage embarrassments with Paco and George. We painstakingly explain ska and confront anti-semitism, fully reenacting 1986. There may be a surprise visit from the Sup Doc Parking Lot players (Mary Van Note and Nick Stargu aka DJ Real). Thanks to all our guests, SF Sketchfest, and Pianofight for hosting.

Comedian Emily Heller has appeared on Conan, on John Oliver’s New York Stand Up Show, and at New Faces at the 2012 Montreal Just For Laughs Festival. She is the creator and star of the Above Average series The Future. She served as a writer on the FOX comedy Surviving Jack and was a series regular on the TBS comedy Ground Floor.

Chris Thayer is a stand-up comic currently living in Brooklyn, NY. He began doing stand-up in San Francisco and later moved to Los Angeles. He was a digital writer for—and was featured on—The Pete Holmes Show, a social media writer for TBS & Funny or Die’s America’s Next Weatherman, and wrote for JASH and Comedy Central’s CC: Studios.

David Gborie spent his formative years in Colorado, started comedy in the Bay Area, and is a full-time comedian based in Los Angeles.

Mary Van Note is a stand-up comedienne of the weird variety. She performs at colleges, clubs and festivals across the country and she is the creator and star of the award winning Independent Film Channel web series The Mary Van Note Show: Gavin Really Wants Me. The San Francisco Bay Guardian called her a “Zine-Queen Comedian” as she regularly makes zines, crafts and mini-comics.

Nick Stargu is a musician, comedian, and writer who is best known for his musical comedy act, DJ REAL, which has been featured in the San Francisco Sketch Festival, the Bridgetown Comedy Festival, the San Francisco Comedy Competition, and more. And he’s opened for Devo! DJ REAL’s show has all original songs, complete with costume changes, bad dance moves, and interactive multimedia. Nick also performs as Imaginary Radio with comedy partner, Drennon Davis. They have performed at SXSW, SF Sketchfest and the Funny or Die Oddball Festival. Nick and Mary perform together on Story Jams. http://soundcloud.com/storyjams