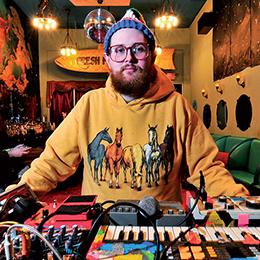 On Episode 11 we caught up with musician/composer Dan Deacon right before his set at Outside Lands Music Festival, and we chatted about the iconic and harrowing Rolling Stones documentary Gimme Shelter (1970 film). Gimme Shelter is a documentary film directed by Albert and David Maysles chronicling the last weeks of The Rolling Stones’ 1969 US tour which culminated in the disastrous Altamont Free Concert. It was a nice bit of irony that this interview took place during Outside Lands Music Festival on the site that was to be the original location for this concert in 1969 before it was moved to Altamont. On this episode Dan has a lot to say about festivals, Gimme Shelter, security, DIY shows, and more!

Gimme Shelter is a 1970 documentary film directed by Albert and David Maysles and Charlotte Zwerin chronicling the last weeks of The Rolling Stones’ 1969 US tour which culminated in the disastrous Altamont Free Concert. The film is named after “Gimme Shelter”, the lead track from the group’s 1969 album Let It Bleed. The film was screened at the 1971 Cannes Film Festival, but was not entered into the main competition.

The counterculture era documentary is associated with the Direct Cinema movement of the 1950s and 1960s. It was directed by The Maysles Brothers who are strong figures of the era.[2] The movement revolves around the philosophy of being a “reactive” filmmaker, recording events as they unfold naturally and spontaneously rather than investigating the subject matter through documentary techniques such as interviews, reconstruction and voiceover.

The film depicts some of the Madison Square Garden concert later featured on the 1969 live album, Get Yer Ya-Ya’s Out! The Rolling Stones in Concert, as well as the photography session for the cover featuring Charlie Watts and a donkey. It also shows the Stones at work in Muscle Shoals, Alabama recording “Brown Sugar” and “Wild Horses”, and footage of Ike and Tina Turner opening for the Stones at their Madison Square Garden concert, to Mick Jagger’s comment, “It’s nice to have a chick occasionally”.

Much of the film chronicles the behind-the-scenes dealmaking that took place to make the free Altamont concert happen, including much footage of well-known attorney Melvin Belli negotiating by telephone with the management of the Altamont Speedway. The movie also includes a playback of Hells Angels leader Ralph “Sonny” Barger’s famous call-in to radio station KSAN-FM’s “day after” program about the concert, wherein he recalls, “They told me if I could sit on the edge of the stage so nobody could climb over me, I could drink beer until the show was over.”

The action then turns on the 1969 concert itself at the Altamont Speedway, the security for which was provided by the Hells Angels (armed with pool cues). As the day progresses, with drug-taking and drinking by the Angels and members of the audience, the mood turns ugly. Fights break out during performances by The Flying Burrito Brothers and Jefferson Airplane; Grace Slick pleads with the crowd to settle down. When Mick Jagger arrives to the grounds via helicopter, he is punched in the face by an unruly fan while making his way to his trailer.

At one point Jefferson Airplane lead male singer Marty Balin is knocked out by a Hells Angel; Paul Kantner attempts to confront “the people who hit my lead singer” in response, announcing: “Hey, man, I’d like to mention that the Hells Angels just smashed Marty Balin in the face, and knocked him out for a bit. I’d like to thank you for that.” To which a Hells Angel sitting on stage grabs a microphone, and replies: “You’re talking to my people. Let me tell you what’s happening. You, man, you’re not happening!” Slick herself warns the Angels after they continue hitting people: “You don’t hassle with anybody in particular. You gotta keep your bodies off each other unless you intend love. People get weird, and you need people like the Angels to keep people in line. But the Angels also– You know, you don’t bust people in the head for nothing. So both sides are fucking up temporarily; let’s not keep fucking up!” Jerry Garcia and Phil Lesh arrive, but The Grateful Dead opt not to play after learning of the incident with Balin from Santana drummer Michael Shrieve.

By the time The Stones hit the stage, it was evening, and the crowd was especially restless. The Stones opened with “Jumpin’ Jack Flash”, and are also shown performing “Sympathy for the Devil”, as the tension continues to build. It is during the next song, “Under My Thumb”, that a member of the audience, 18-year-old Meredith Hunter, attempted, with other crowd members, to force his way onto the stage[citation needed], and as a result is struck by the Hells Angels members guarding the band. He is then seen to draw a revolver before being subdued by Hells Angel Alan Passaro, and is killed by at least six stab wounds.

Baird Bryant, one of the many cameramen in the film, caught Hunter’s stabbing on film. The film sequence clearly shows the silhouette of a handgun in Hunter’s hand against the dress of his girlfriend, Patty Bredahoff, as Passaro enters from the right, grabs and raises the gun hand, turns Hunter around, and stabs him at least twice in the back before pushing Hunter off camera.

Dan Deacon is an American composer and electronic musician based out of Baltimore, Maryland. Since 2003, Deacon has released eight albums under several different labels. Deacon is renowned for his live shows, where large-scale audience participation and interaction is often a major element of the performance.

Dan is famed for his live shows. When playing solo he performs on floor level within the audience, his musical devices being set up on a low table, and surrounded by the crowd.

In stark contrast to Deacon’s electronic performances, the Bromst tour was with a 14-person ensemble of members of various Baltimore bands including So Percussion, Future Islands, and Chester Gwazda. He was accompanied by various acts including Nuclear Power Pants. This tour is also notable for the musicians’ use of a vegetable oil powered bus.

For his America tour, Deacon created a smartphone app that synchronizes with the live show. It is usually used during the song “True Thrush.”

His first two albums as a solo artist, Meetle Mice and Silly Hat vs Egale Hat were released on CD-R on Standard Oil Records in 2003 while he was a student at SUNY Purchase. The albums are collections of both computer music and live recordings of ensemble pieces. They are markedly different from his first popular record, 2007’s Spiderman of the Rings, in that they contain almost no tracks where Deacon sings or uses vocal manipulation. Most of the pieces are instrumentals or sound collages. He followed those two albums with a set of records made up of sine wave compositions. “Green Cobra is Awesome Vs The Sun” is a 42-minute piece consisting of six slowly drifting sine waves. “Goose On The Loose” is a 60-minute piece featuring a Wavetek 180 signal generator being processed through a DigiTech Whammy and a Line 6 DL4.

His next two releases were the EPs Twacky Cats on Comfort Stand Recordings and Acorn Master on Psych-o-path Records. Spiderman of the Ringswas Deacon’s first commercially distributed full-length album, released by Carpark Records in May 2007.The album was well received and was included in the Best New Music section of Pitchforkmedia.com. The album was also ranked as number 24 on the website’s “Top 50 Albums of 2007”.

Ultimate Reality was released as a DVD in November 2007 and marked a return to composing music for others to perform. The pieces for percussion and electronics were performed by Jeremy Hyman of Ponytail and Kevin Omeara of Videohippos. The pieces were set to collaged and heavily altered video created by Deacon’s long time friend and collaborator Jimmy Joe Roche.

Deacon’s next album entitled Bromst was released on March 24, 2009. It was produced by Chester Gwazda at Snow Ghost Studios in Whitefish, Montana and features live instruments including player piano and a variety of percussion instruments. The album was well received; Pitchfork gave it an 8.5/10, and it placed it into the “best new music” section. Bromst also ranked #46 in Pitchfork’s Best Albums of 2009.

The 9-song album America, was released on August 28, 2012, on Domino Records in the US. Deacon has described the album as representing his conflicted feelings toward the country and world he calls home: “The inspiration for the music was my love of cross-country travel, seeing the landscapes of the United States, going from east to west and back again over the course of seasons. “The lyrics are inspired by my frustration, fear and anger towards the country and world I live in and am a part of. As I came closer to finishing the album these themes began to show themselves more frequently and greater clarity. There seemed no better world to encapsulate both inspirations than the simple beauty found in the word America.”

Special thanks to Caroline Borolla for arranging the interview.