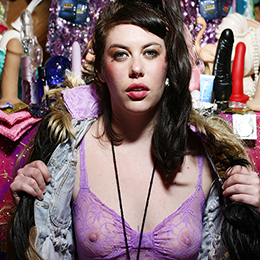 On Episode 10 of Sup Doc Paco and George sit down with writer/performer/sex worker Queenie Bon Bon. They discuss the 2012 documentary Meet The Fokkens a delightfully odd tale about familial bonds, getting older, and the lengths some women go to in order to survive.
Few characters in documentary history are as hilarious and adorable as 69-year old Dutch twin prostitutes Louise and Martine Fokkens.
Queenie Bon Bon’s website:
Here is the link to the documentary Queenie Bon Bon recommends: The Scarlet Road

Amsterdam’s oldest prostitutes have given up the world’s oldest profession – at the ripe old age of 70. Identical twin sisters Louise and Martine Fokkens have clocked up more than 50 years each between the sheets – sleeping with a combined total of 355,000 men. And now the octogenarian duo have announced their retirement, The Sun reports.

Mother-of-four Louise says her arthritis makes some positions “too painful” during sex and Martine, who has three children, says she is finding it difficult to attract new customers. The girls began their careers working for a pimp, but soon branched out to run their own brothel in Amsterdam’s Red Light District. They are also credited with setting up one of the first informal trade unions for prostitutes.

In 2012 they featured in the documentary Meet The Fokkens – at which point Louise had briefly thrown in the towel due to her arthritis, explaining “I couldn’t get one leg over the other”. Martine however was still plying her trade, with Louise explaining: “She needs the money. You can’t live off a state pension.” Additional clips featured one of the sisters gleefully exclaiming: “I can’t tell you how many tricks we’ve had – countless,” as the pair browse vibrators in a sex shop.

The sisters estimate they have slept with a combined total of 355,000 men. Another scene sees Martine applying lipstick while calling out to an unseen man: “I’m almost there, did you hear me? “Yes mistress”, comes the muffled reply, to which Martine nods, muttering “Good boy”. The sisters were wholly candid about their profession, with Louise voicing her continued support to Martine: “You did the work, you’ve been a whore. You’ll never get rid of that name. “They’ll always call you names, so be one.”

The documentary also saw the pair hoisting their matching red dresses over their knees and dancing a jig outside their Amsterdam home with their faithful Chihuahua standing by. “This is the story we wanted to tell,” directors Gabriëlle Provaas and Rob Schröde said in a statement reported by ABC News.

Queenie Bon Bon’s DEEPLY LEISURED is a hybrid performance that spans the genres of stand up comedy, performance, lecture, and consciousness-raising story telling. Queenie Bon Bon presents narratives detailing her deep love for her clients & coworkers, and the eternal joys and mysteries of working with bodies. She also shares stories on coming out as a sex worker to her mother, whorephobia and internet dating, and covering up when you peed on the carpet at your workplace. A tender and true look into her lived experience as a sex worker, coworker solidarity, as well as social and political issues surrounding sex work, DEEPLY LEISURED is full of intrigue and inspiration.