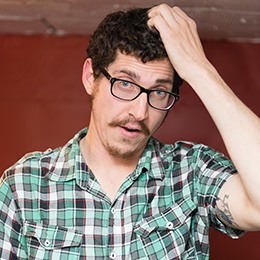 2 Yr Anniversary Re-Cut of Episode One: The Jinx with Matt Lieb

2 Yr Anniversary Re-Cut of Episode One: The Jinx with Matt Lieb

It is Sup Doc’s 2 Year Anniversary! We thought there was no better way to celebrate and end our MAYHEM month than airing a re-cut episode 1 The Jinx. On episode 1 Paco and George met up with comedian, actor, writer Matt Lieb to talk about HBO’s 6 part documentary The Jinx: The Life and Deaths of Robert Durst. A lot has happened for Sup Doc and Mr Durst since this originally aired on May 5th 2015.

What the hell did I do? Killed them all, of course.— Robert Durst muttered to himself

The Jinx is a groundbreaking six-part documentary that delves into the history of real estate heir Robert Durst, suspected in the unsolved 1982 disappearance of his wife as well as the murders of family friend Susan Berman and neighbour Morris Black. It features an extended, revealing interview with Durst himself. `The Jinx’ results from nearly a decade of research exposing police files, key witnesses, never-before-seen footage, private prison recordings, and thousands of pages of formerly hidden documents.

The series was also directed by Andrew Jarecki, who had previously directed the feature film All Good Things (2010), which was inspired by Durst’s biography.

Robert Durst had professed admiration for All Good Things and telephoned Jarecki after its release, offering to be interviewed (a conversation recorded and incorporated into the documentary). Durst would ultimately sit with Jarecki for more than 20 hours over several years, despite having never previously cooperated with any journalist.

The Jinx gained widespread exposure when Durst was arrested on first-degree murder charges the day before its finale aired.

Matt Lieb is a comedian, writer, actor and street musician/Bone Thugs-N-Harmony cover band. He was named “one of my all-time favorite Bay Area performers” by the award-winning SF blog Courting Comedy and described as “extremely talented, charmingly dark and genuinely pleasant.” He won 2nd place at the 2004 KZSC Comedy Competition, but the guy who won 1st place no longer does comedy so Matt basically won 1st place. He also won 1st place at the 2013 Rooster-T-Feathers Comedy Competition, which was very validating for him. Matt Lieb has opened for many legendary performers including W. Kamau Bell, Gilbert Gottfried, Jeff Ross, Rory Scovel, Ryan Papazian and 3rd Eye Blind. He is also Glenn Danzig’s neighbor and Emmy-winner Camryn Manheim is a family friend. He writes for Filmdrunk and has written for Yahoo!’s Broken News Daily