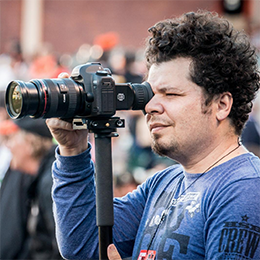 *Pat and Jim will also be at a screening Monday June 5th (the same day part 2 of this interview drops) at the Alamo Drafthouse Mission Theater, followed by a Q&A and a live performance from Rogue Wave. Tickets in link.

In the first of this two-part interview, George and producer Will speak to Jim Granato, director of D Tour. D Tour is the story of musician Pat Spurgeon who is in need of a kidney transplant right when his band Rogue Wave is taking off. This leads to situations like Pat having to perform portable dialysis in the back of a van or the green room of a club. Though it has the shape of a music documentary, it’s about dealing with healthcare, mortality, and human generosity. Jim talks about how his friendship with Pat and the band lead to this film, handling the delicate subject matter, and his background in filmmaking. George talks about his own personal history with organ donation and human-pig hybrids. There are many twists and turns to be revealed, and we follow up on Monday June 5th with the documentary’s subject, Pat Spurgeon.

Jim Granato is a self-taught, award-winning filmmaker based in Oakland, California. He has directed and produced several short films and music videos since 1996. His most recent shorts, A Day With My Boy: Slug War (2014), premiered on PBS Online Film Festival, and Angels (2013), currently on Fandor, screened recently at the San Francisco International Film Festival and was nominated for a Golden Gate Award. He has made music videos for Sonny & The Sunsets, Ramon & Jessica, Pancho-San and The Bobbyteens.

D Tour (2009), his first feature film as director and producer, has won several awards including the Golden Gate Award for Bay Area Feature Documentary from the San Francisco International Film Festival and the Jury Prize for Best Documentary from the Bend Film Festival. D Tour premiered nationwide on the PBS Emmy award-winning program Independent Lens in November 2009. He is currently working on a second feature film project with underground “budget rock” legends, The Mummies.

As a freelance Director, Producer, Videographer and Editor, he has worked on projects for ITVS, The History Channel, The Travel Channel, Court TV, San Francisco Museum of Modern Art, Oakland Museum of California, The Exploratorium and dozens of independent filmmakers and organizations worldwide.

Pat Spurgeon is the drummer of Rogue Wave, an indie rock band that’s toured the world and released several critically acclaimed albums. He’s passionate about his career as a professional musician, and he’s determined to not let anything stand in the way—not even a serious medical condition. Pat was born with just one kidney, which began deteriorating when he was in junior high school. He received a kidney transplant, but after 12 years, just as Rogue Wave starts to take off, that kidney begins to fail. D TOUR follows Pat’s search for a living organ donor and the myriad challenges associated with finding a viable match.

At age 41, Pat is faced with the possibility of having his lifelong dream of touring with a rock band vanish. Dialysis again becomes part of his daily regimen, raising the question of whether he could—or should—even continue touring. After much soul-searching and discussion, the band members make a business decision to keep Pat on, adjusting their travel arrangements with a focus on his health. With so much time devoted to “doing a D,” or dialysis, Pat begins referring to the band’s tour as the “D tour.”

Dialysis does not cure kidney disease, and Pat is put on the national registry list to receive a kidney if and when one becomes available. In 2006, the chance of receiving a kidney from a matching donor is twenty-to-one and the wait is expected to be six years. Finding a living donor could shorten the wait, but finding the perfect match, especially within the U.S. health care system, proves to be an urgent, difficult and often emotional experience.

Featuring live performances from Ben Gibbard (Death Cab for Cutie), Nada Surf, John Vanderslice, The Moore Brothers and Rogue Wave, D TOUR chronicles Pat’s experience coping with his condition, and his fierce resolve to go on with a “normal” life despite living with an uncertain future.