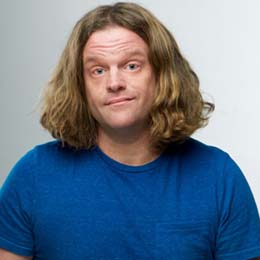 On Ep 83 we sat down with comedian Alex Hooper to talk about the Academy award-winning documentary Man On Wire. Alex has a strong connection to this doc because he recently started slacklining and as we discover there is more than a casual connection between walking on a wire without a net and performing comedy! Alex’s new comedy album Hugs. Drugs. Pugs is currently available on AST Records!

Man on Wire is a 2008 British-American biographical documentary film directed by James Marsh. The film chronicles Philippe Petit‘s 1974 high-wire walk between the Twin Towers of New York’s World Trade Center. It is based on Petit’s book, To Reach the Clouds, released in paperback with the title Man on Wire. The title of the film is taken from the police report that led to the arrest (and later release) of Petit, whose performance had lasted for almost one hour. The film is crafted like a heist film, presenting rare footage of the preparations for the event and still photographs of the walk, alongside re-enactments (with Paul McGill as the young Petit) and present-day interviews with the participants, including Barry Greenhouse, an insurance executive who served as the inside man.

“Most of the movie involves figuring out how Philippe and his team will get into the towers to rig the line. The commitment to detail is incredible. I love that they are doing something illegal, but it doesn’t hurt anyone or anything. There isn’t a specific moment as this is most of the film but the pure desire to get it done is more impressive to me than the actual walk.”