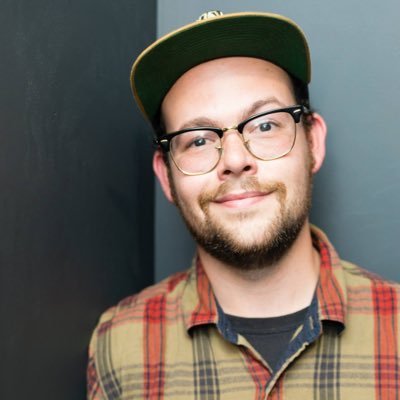 On Episode 84 of Sup Doc host Paco Romane sat down with comedian, writer and cook Drew Platt. Not only is Drew a great comedian, he is equally adept in the kitchen. Drew made some delicious Wiener schnitzel. They ate and drank some tasty brews and watched American Movie. One of the greatest docs ever made and one of Paco’s favorites. Paco and Drew also discuss comedy, small towns, the entertainment biz and so much more! You won’t want to miss this one!

(American Movie Review) If you’ve ever wanted to make a movie, see “American Movie,” a documentary about someone who wants to make a movie more than you do. Mark Borchardt may want to make a movie more than anyone else in the world. He is a 30-year-old, odd-job man from Menomonee Falls, Wis., who has been making movies since he was a teenager and dreams of an epic about his life, which will be
titled “Northwestern,” and be about “rust and decay.” I admire his spirit, and I even admire certain shots in the only Borchardt film I have seen, “Coven.” I saw it at the 1999 Sundance film festival–not because it was invited there, but because after the midnight premiere of “American Movie,” there wasn’t a person in the theater who didn’t want to stay and see Mark’s 35-minute horror film, which we see him making during the course of the documentary.

“American Movie” is a very funny, sometimes very sad documentary directed by Chris Smith and produced by Sarah Price, about Mark’s life, his friends, hisfamily, his films and his dreams. From one point of view, Mark is a loser, a man who has spent his adult life making unreleased and sometimes unfinished movies with titles such as “The More the Scarier III.” He plunders the bank account of his elderly Uncle Bill for funds to continue, he uses his friends and hapless local amateur actors as his cast, he enlists his mother as his cinematographer, and his composer and best friend is a guy named Mike Schank who, after one drug trip too many, seems like the twin of Kevin Smith’s Silent Bob.

Borchardt’s life is a daily cliffhanger involving poverty, desperation, discouragement and diehard ambition. He’s behind on his child support payments, he drinks too much, he can’t even convince his ancient Uncle Bill that he has a future as a moviemaker. Bill lives in a trailer surrounded by piles of magazines that he possibly subscribed to under the impression he would win the Publishers Clearing House sweepstakes. He brightens slightly when Mark shows him the portrait of an actress. “She wants to be in your movie, Bill!” Bill studies the photo: “Oh, my gorsh!”  Some of the scenes could work in a screwball comedy. One involves an actor being thrown headfirst through a kitchen cabinet. To capture the moment, Mark recruits his long-suffering Swedish-American mother, Monica, to operate the camera, even though she complains she has shopping to do. He gets on the floor behind his actor, who finds out belatedly that Mark’s special-effects strategy is simply to ram his head through the door. The first time, the actor’s head bounces off. Mark prepares for take two. One reason to see “Coven” is to appreciate that shot knowing what we know now.He has inspired the loyalty of his friends and crew members, and his girlfriend observes that if he accomplishes 25 percent of what he hopes to do, “that’ll be more than most people do.”

DREW PLATT IS A STANDUP COMIC FROM SOUTH MISSISSIPPI WHO STARTED DOING COMEDY IN NEW ORLEANS. AFTER DOING SEVERAL FESTIVALS IN THE SOUTH INCLUDING SXSW AND FUN, FUN, FUN FEST HE MOVED TO SAN FRANCISCO WHERE HE’S PERFORMED AT SOME OF THE COUNTRIES BEST COMEDY CLUBS, INCLUDING THE PUNCH LINE, COBB’S COMEDY CLUB, THE COMEDY STORE & THE LAUGH FACTORY. DREW CURRENTLY LIVES IN LOS ANGELES, AND HAS OPENED FOR COMEDIANS SUCH AS LOUIS C.K., MICHELLE WOLF, MICHAEL IAN BLACK, DAVID ALAN GRIER AND MANY MORE.
HE’S VERY EXCITED TO BE RECORDING HIS DEBUT ALBUM WITH BLONDE MEDICINE THIS SUMMER.