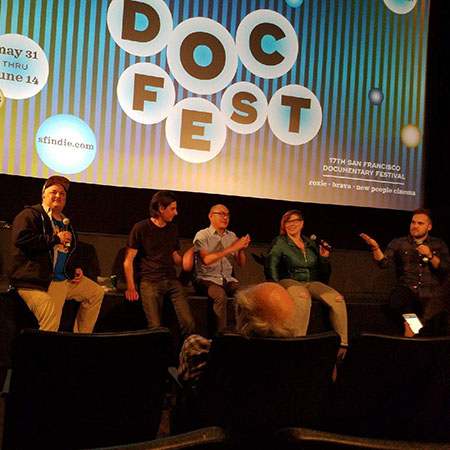 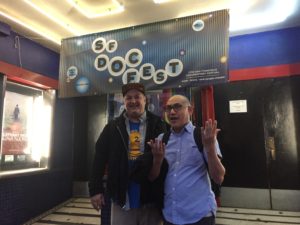 We had a great time recording this LIVE at the SF Docfest. Lots of adoring Freaks and Geeks and Sup Doc fans showed up for the live recording! Hosts Paco Romane and George Chen chatted with the director Brent Hodge and comedians (and uber Freaks and Geeks fans) Kelly Anneken and David Klein!

Freaks and Geeks: The Documentary is currently playing on A&E.

The cult classic TV show Freaks and Geeks nailed the sad, hilarious unfairness of teen life. This new doc takes a nostalgic look back with behind-the-scenes tales from this endearing and much-loved series that launched the careers of many of today’s biggest stars (including Seth Rogen, Jason Segel, James Franco and Linda Cardellini, Busy Phillips, John Francis Daley and more).

12 Things You May Have Not Known About Freaks and Geeks

1. James Franco and Jason Segel were cast at the same time

James Franco and Jason Segel, who played two of the “freaks” on Freaks and Geeks, sat in the waiting room of the audition at the same time on the same day. According to Segel in the documentary, Franco went in first, he went in second, and they both walked to their cars that day with the gig. As a young actor, the future Forgetting Sarah Marshall star asked how their chemistry would work: Would he be the goofy one and would Franco be the cool one? Franco’s one-word response was: “Yeah.”

2. Most of the set footage in the doc came from producer Gabe Sachs

Hodge recalls stepping into the home of writer-producer Gabe Sachs and seeing it as a “museum.” He had heard from Feig that there was a lot of “stuff” lying around, but he didn’t realize he still had items like the Parisian night suit worn by John Francis Daley in “Looks and Books” — and again at the finale wrap party.

“He handed me this box of mini DVDs from 1998. He was like, ‘You can have this. No one’s seen this footage,’” Hodge said. “There was hundreds of hours of footage.” That included moments like writer-producer Judd Apatow’s birthday, a time when “Paul didn’t have a suit on,” the graduation party for Seth Rogen (which we’ll get to later) — essentially “all the behind-the-scenes” footage shot on set with a camcorder.

“I didn’t realize you were videotaping some of the stuff,” Feig told Sachs, who was sitting in the audience.

3. About that time NBC wanted Britney Spears on an episode

If you’ve been maintaining a working knowledge of Freaks and Geeks trivia, then you know NBC executives, as a solution to make the show popular, proposed writing a character for Britney Spears. “One of the [network notes] was that they really wanted us to write Britney Spears into an episode,” Feig said with a laugh. “They were like, ‘She’s really popular now. Maybe she can play, like, a waitress or something.’” The series creator doesn’t look back on any of the network’s stunt suggestions and think they could’ve worked.

Feig even slightly defended Garth Ancier, the now former NBC Entertainment president who famously didn’t understand the allure of Freaks and Geeks. “He didn’t get the show and that’s fine, people don’t get stuff all the time,” he said. “In his defense — not in that regard, but just out of canceling us — you saw that thing at the end [of the documentary]. We were the bottom-rated show on NBC for pretty much the second half of the run. It’s show business, and the business side just didn’t hold up.”

Ancier has been vilified by fans in the past for not championing the series while it was on the air. So for better or worse, he was part of the Freaks and Geeks legacy, and Hodge really wanted him for the documentary.

“Everyone was talking about Garth Ancier. He’s this other figure, and I just reached out to him on Twitter, actually,” the director said. “I was just like, ‘Everyone’s talking about you and I feel like you deserve a chance to at least tell your side of the story.’ He said, ‘I’d be happy to.’ Honestly, I really respect him, even though he’s the most evil man — no, I’m kidding.”

5. On the “obligation” to make the quintessential Freaks and Geeks film

Feig knew his brainchild was in good hands with The Documentary when he drove to the shooting location for his interview and found Hodge’s team had recreated the sets, something Hodge said “snowballed.”

“You liked it,” he told Feig, “then Jason Segel really liked his 27-piece drumset. We just kept going. It almost went overboard.”

There were some things, though, he said needed to be in the film — like an interview with Dennis DeYouny from Styx, whose song “Lady” is at the center of Sam’s awkward school dance, and a cover of Joan Jett’s “Bad Reputation” that plays over the credits.

“There’s an opportunity to make the Freaks and Geeks film,” Hodge said. “There’s 100 O.J. documentaries and I’ll watch them, they’re great, but if you get the chance to nail it, you gotta nail it. You have one chance. You have to get Dennis DeYoung from Styx. You have to get that song, you have to get Joan Jett. It’s almost like an obligation to do that.”

6. The wrap party turned into a graduation for Rogen, Samm Levine, and Martin Starr

Rogen didn’t finish high school, but he finally got a graduation during the Freaks and Geeks wrap party. Footage shot by Sachs and given up for the documentary shows Feig and Apatow giving out caps, gowns, and diplomas to Rogen, Samm Levine, and Martin Starr on stage.

Feig said everyone in the writer’s room was pretty much in sync, but recalled the biggest battle amongst the team being the 17th episode, “The Little Things.” In it, Ken (Rogen) falls for the school’s tuba player and learns she was born with ambiguous genitalia. What started as a joke between Apatow and and fellow writer-producer Mike White became a more serious look at this topic.

“‘What if his girlfriend ended up having a dick?’ is basically what their joke was,” Feig said, “and then suddenly Judd’s like, ‘Well, wait a minute. Let’s actually look into this thing.’” Jonathan Kasdan wrote the first draft of the episode, which “became very contentious” because everyone “wanted to do a lot more things with it.”

“Everybody tried to get us to stop it, but then we all pitched in and started rewriting it,” Feig recalled, “and then, like it says in the documentary, Judd took Jessica [Campbell] and Seth into his office, and they started improving.”

“You don’t want to back down from these stories, and that’s what the network hated,” he added.

8. The real-life stories behind the episodes

Questionnaires were a big thing among the writers to get to know each other’s stories. The goal was avoid writing about something that had already been done before. As a result, much of their own personal experiences were translated to the screen.

Feig’s fear of asking out the girl to the dance before it was too late is played out in the character of Sam, the titular moment behind “The Garage Door” was lifted from the life of writer-producer Jeff Judah, and Apatow remembers doing exactly what Starr’s Bill does — making grilled cheese, eating Entenmann’s, and watching Garry Shandling on TV.

“When we did those questionnaires, we got the group together before we started writing anything,” Feig recalled. “We locked ourselves in the room for two weeks and would read those questionnaires out loud and elaborate on it and interview each other because it’s a way for everyone to get completely honest and not hold anything back — and that’s where the good stuff comes from.”

9. The moment Feig knew the show was dead

“I was talking to some critic. He loved the show and he had just watched the ‘I’m With the Band’ episode, with Jason Segel auditioning for the band,” Feig explained. “I said, ‘What did you think about the audition scene? It was great, right?’ And he goes, ‘When that scene came on, I had to get up and leave the room. I couldn’t watch it because I knew it was gonna go wrong.’ I was like, ‘Well, that’s not what you’re supposed to do. You’re supposed to revel in how fun this is.’” This, he said, was the moment he knew “the show was dead.”

The same reason Feig thinks Six Feet Under has the greatest series finale ever is the same reason why he doesn’t like going to his own high school reunions. The HBO show had a finite conclusion, without any room to think about what could’ve been for its characters. “I want to remember people as I did,” he said of his own former classmates. “I don’t want to know if something bad happened. So many people relish in [who became] bald and fat. No, I like those people and I like my memories of them.”

11. The episode Feig was “desperate” to tell, but couldn’t

Feig had already mentioned in past interviews the real-life drama teacher he wanted to work into the show for a hypothetical second season, and he detailed his own experience and what he wanted for the character of Sam.

“When I was in school, I was in drama club — a big drama geek — and my teacher, who I credit my entire career [to], Ms. Konrad, she was an amazing drama teacher who shouldn’t have taught high school; everything she taught was much deeper than that, but she was an alcoholic,” he said. “I was the one she would call to bail her out of trouble. So I would be in class and suddenly there would be a knock on the door and they’d be like, ‘Uh, there’s an emergency phone call for Paul.’”

The call would always be something like, “You gotta come pick me up. I left my car at the bar.”

“I was learning amazing things from her about acting and about theater and just about art,” Feig recalled, “but she was just a complete disaster, and I really wanted Sam to have that kind of relationship with a drama teacher.”

12. Feig believes a Freaks and Geeks musical will happen

In the documentary, Hodge asks the cast and crew about a potential revival or reunion episode for Freaks and Geeks, and they all have the same answer: How would that work? Feig, however, wants to do a staged rendition of the show. “I’ve been saying for 15 years I so wanna do the Freaks and Geeks musical,” he said. “I just gotta write the book for it, but I think it will happen one day because it’s just sitting there, waiting to be done. A musical number of a dodgeball game, come on!”