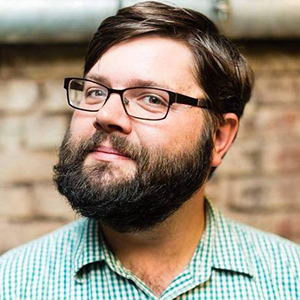 On episode 92 host Paco Romane recaps with the lovely and talented Chad Opitz about Evil Genius: The True Story of America’s Most Diabolical Bank Heist! Evil Genius is a 2018 true crime docuseries about the murder of Brian Wells, a high-profile 2003 incident often referred to as the “collar bomb” or “pizza bomber” case. It was released on Netflix as a four-part series on May 11, 2018.

Evil Genius is one of those docs that keeps you saying “no way” and wanting to binge watch the entire series. Seriously. It’s nuts. If the Apple Dumpling gang were MENSA members with a taste for revenge, money and murder you’d have the makings of Evil Genius.

Chad Opitz is a comic whose hilarious and unique perspective is making him an oft booked staple at Bay Area clubs and showcases. Veering between one-liners, short story jokes, and sometimes even song, Opitz’ writing is as well-regarded as his character and performance work.

Chad was a featured performer at the 2016, 2017 and 2018 San Francisco Sketchfests. He hosted an episode of “The Guest List” on Audible Channels in 2017. Chad was the winner of Bay Area legend Jimmy Gunn’s “Best Newcomer” award as well as a finalist in the Rooster T. Feathers Competition, semi-finalist in the San Francisco Comedy Competition, 2nd place finalist at the 2016 Sacramento Comedy Competition and 1st place winner of the Walk the Plank comedy competition.  He’s opened for Michelle Wolf, Scott Thompson, Gad Elmaleh, Neil Hamburger, Greg Behrendt, Ian Bagg, Brooks Wheelan and many more.  He was recently a featured guest on the Doug Loves Movies podcast.