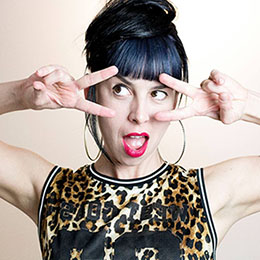 We sat down with comedian Krista Fatka. Krista recently won first place in The Sacramento Comedy Competition and along with Paco Romane produces The Charm Offensive at the San Francisco Punch Line. With over a decade of performance experience in circus and theater, she’s as comfortable on stage as she is in a room full of clowns. Which is to say, pretty comfy.

Krista wanted to discuss Vikram Gandhi’s 2012 documentary KUMARE. Gandhi, a lapsed Hindu, conducts an experiment posing as a guru named Kumare. Kumare/Gandhi attracts a number of followers in Arizona and is surprised to find they are getting genuine benefits from his deception. The question is when and how he’ll reveal the truth behind Kumare?

To record the documentary, American filmmaker Vikram Gandhi transformed himself into Sri Kumaré, an enlightened guru from a fictional village in India, by adopting a fake Indian accent and growing out his hair and beard. In the film, Kumaré travels to Arizona to spread his made-up philosophy and gain sincere followers.

Kumaré premiered at the 2011 South by Southwest Film Festival (SXSW), where it received the festival’s Feature Film Audience Award for Best Documentary Feature. Gandhi came up with the idea of a fictional guru while recording another documentary film about yogis and their followers.

We discuss a lot in this episode: comparing this film to prank-based non-fiction like Nathan For You and Borat, Cafe Gratitude, past scams we’ve been victim to, and spiritual seeking for cynics.