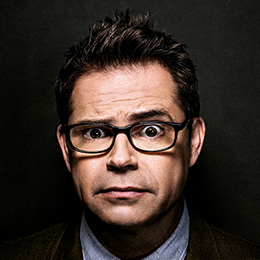 Ep 73 SOME KIND OF MONSTER with legendary comedian Dana Gould

Ep 73 Some Kind of Monster with comedian/writer Dana Gould 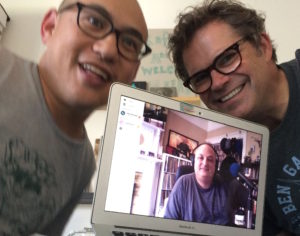 On Ep 73 rounding out our Rocktober music doc series, hosts Paco Romane and George Chen sat down with the brilliant writer and comedian Dana Gould. They talked about the 2004 Metallica doc Some Kind of Monster which Dana rightfully described as “the best documentary ever made about marriage”. They also get into a discussion about therapy, his favorite jokes from The Simpsons, JFK, divorce, stage worthy jokes, father figures, Brian Wilson, John Lennon, and so much more! Dana Gould was a long-running head writer on The Simpsons, a legendary stand up comic who came out of the Boston and San Francisco scenes, and he is the creator of the television show Stan Against Evil. His latest comedy album Mr. Funny Man just came out on Kill Rock Stars and the second season of Stan Against Evil premieres Nov 1st on IFC.

Dana Gould is an American stand-up comedian, writer and actor who has been featured on HBO, Showtime, and Comedy Central. Dana began performing comedy onstage at age 17. After high school, he studied communications and theatre at the University of Massachusetts Amherst, but after a year moved to San Francisco to pursue a career in comedy. It was there he, along with fellow comedian Alex Reid, founded the San Francisco Comedy Condo in 1986.

Gould wrote and performed on The Ben Stiller Show; one such sketch features Gould as Otto, Cupid’s twisted brother, whose arrows convince a young man to fall madly in love with an elderly woman. Another series of sketches features a heavily disguised Gould as Wilford Brimley advertising “Grady’s Oats.”  He also appeared in an episode of MADtv and on one episode of Seinfeld (“The Junk Mail“) as “Fragile” Frankie Merman. He co-created and was executive producer on the MTV series Super Adventure Team. In addition Gould’s stand up material was featured in Comedy Central’s animated series Shorties Watchin’ Shorties.

In 1998, Gould appeared in the episode “Supermarket Story” of The King of Queens. For seven years he wrote for The Simpsons. He left the show in late 2006 in order to focus on his own screenwriting, though he served as co-executive producer on seasons 14 through 18.

Gould had a featured cameo in the 2003 film Girls Will Be Girls. He was also featured in the film The Aristocrats, where, among other commentary, he presents an Amish version of the eponymous joke. His short films, Last Man On Earth, Break On Through With J.F.K., A Night On Java Island, and Soul Mates are also available for download on his site. Except for the latter, all feature Gould in acting roles. 2009 saw the release of his new stand up special, “Let Me Put My Thoughts In You” on Shout Factory.

Gould provided the voice for the title character in the U.S. versions of the Gex video game series and the UK version of the first game. Gould, with his frequent writing partner Rob Cohen, wrote the majority of the jokes for the games.

The first episode of Gould’s own podcast, The Dana Gould Hour, was made available on iTunes on January 31, 2012. Recurring guests include comedians like Eddie Pepitone and each episode revolves around a singular theme. Currently, a new episode of The Dana Gould Hour is released about every two months.

In 2014, Gould participated as a comedian on Playboy’s “Foursome: Walk of Shame” where he joined other comedians in making fun of the program’s contestants.

Some Kind of Monster is a 2004 American documentary film featuring the American band Metallica. It shares its name with the song “Some Kind of Monster” from Metallica’s 2003 album St. Anger. The film shows many studio rehearsals and fragments of concert footage. It won the Independent Spirit Award for Best Documentary Feature. The DVD release was handled by Paramount Pictures. Metallica re-released the film, including a bonus documentary, in 2014 to celebrate its 10th anniversary.

Metallica is forced to examine their nature and their very existence as bassist Jason Newsted quits the band and frontman James Hetfield abruptly leaves the group to enter rehab. Metallica’s management Q-Prime hires “performance-enhancing coach” Phil Towle to help the group better understand one another as friends, bandmates, and human beings. When the members of Metallica eventually decide that Towle’s services are no longer required, Towle attempts to convince them that they still need him, saying “We’ve still got some trust issues that I think we need to sort out.”

Former Metallica guitarist Dave Mustaine also appears briefly in a scene in which, as part of Lars Ulrich‘s therapy, he confronts the guitarist on September 13, 2001, regarding the decision to fire him early in the band’s career for his excessive drinking. On top of the core relationship issues discussed during this meeting are two considerations specific to the date that it took place that will help aware viewers understand the tension and frustration in the room. First, the scene with Mustaine and Ulrich was filmed precisely two days after September 11th. This also just happened to be Dave Mustaine’s 40th birthday. For many years, until the burying of the hatchet between him and Metallica, Mustaine would grouse that he would much rather have spent his 40th birthday in Arizona with his wife and kids rather than on a couch in the Bay Area talking to Lars, even though the two had not had any serious personal contact for many years. In the meeting, Mustaine speaks frankly about his resentment stemming from his dismissal without the opportunity to redeem himself with an alcoholism treatment program; a point of view that Ulrich concedes he had never considered before.

In a scene where Hetfield, Ulrich, Kirk Hammett, and several others are discussing titles for the album, Hetfield suggests to use the name of the song “St. Anger.” Many of the other people in the scene agree that it is a good title; however, Ulrich prefers “Frantic,” which would become the first track on the album. Ulrich is eventually convinced that “Frantic,” as an album title, would suggest a perceived lack of focus by the band.

The film contains many excerpts from the studio of unreleased tracks, such as “Shadows of the Cross”, “Dead Kennedy Rolls”, “Riff” and “More Than This (Whipping Boy)”. The only unreleased song that can be heard fully is “Temptation”.

The movie also addresses the early 2001 departure of longtime member Newsted. He is interviewed, and both rehearsal and concert footage of his own group, Echobrain, is shown. Footage is shown from public auditions the band held to find a replacement bass player. In a scene after Robert Trujillo‘s audition, guitarist Hammett notes that he uses his fingers to play, rather than a pick and mentions that it “hasn’t been that way since Cliff Burton“, Metallica’s bassist before Jason Newsted. The band members later concur not only that Trujillo was the only bassist who didn’t appear to be struggling with Metallica’s material, but that playing with him forced the other three to tighten up their own parts. In a sense, Trujillo “made us play better.”