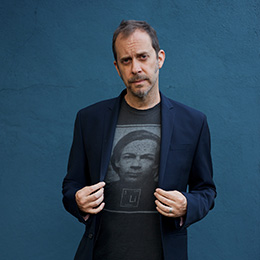 ROCKTOBER continues with TONY CONRAD: COMPLETELY IN THE PRESENT. George visits director Tyler Hubby at his Echo Park home. Tyler spent over twenty years following Tony Conrad and decided to put it all into one documentary encompassing Conrad’s life and art, as if there were a distinction between the two.

Arrange your own screening of the film by contacting Tyler directly.

Anthony Schmalz “Tony” Conrad (March 7, 1940 – April 9, 2016) was an American avant-garde video artist, experimental filmmaker, musician, composer, sound artist, teacher, and writer. Active in a variety of media since the early 1960s, he was a pioneer of both structural film and drone music. He performed and collaborated with a wide range of artists over the course of his career, most prominently La Monte Young‘s 1960s New York experimental music group Theatre of Eternal Music.

Tyler Hubby began making films and photographs as a young boy. While in high school he was mentored by a then unknown young director named David Fincher. He later went on to study film and photography at the San Francisco Art Institute where he had the privilege of studying with George Kuchar.

He has edited over 30 documentary films. Most notable among them are The Devil and Daniel Johnston, a picaresque biography of mentally ill artist/musician Daniel Johnston; Double Take, Belgian artist Johan Grimonprez’s metaphysical essay on the cold war, the rise of television and the murder of Alfred Hitchcock by his own double; the HBO documentary A Small Act; Drafthouse Films’ The Final Member which follows the curator of the Icelandic Phallological Museum as he attempts to complete his exotic penis collection;and Participant Media’s The Great Invisible, which won the Grand Jury Prize at SXSW 2014. He also edited and co-produced Lost Angels about the denizens of Los Angeles’ Skid Row and the new punk rock documentary Bad Brains: A Band in DC. He served as an additional editor on the Oscar nominated The Garden and HBO’s Roman Polanski: Wanted and Desired.

He also edited the gothic horror short Usher, by cult director Curtis Harrington about whom he also co-directed a short documentary entitled House of Harrington.

In 2016 he released Tony Conrad: Completely in the Present, his debut feature documentary about iconoclastic multi-media artist Tony Conrad.