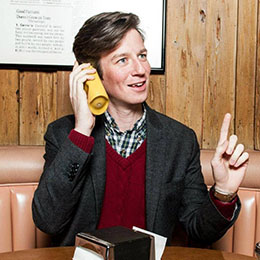 On episode 65  we sat down with comedian Allen Strickland Williams to discuss and dissect BEST OF ENEMIES and the relationship between two colossal minds and ideological opposites William F. Buckley Jr. and Gore Vida. Their series of riveting, nationally televised debates ushered in a new era of public discourse and pundit TV.

In the summer of 1968, television news changed forever. That year, gunmen assassinated both Robert Kennedy and Martin Luther King, Jr. The Democratic convention in Chicago flared up with protests and violence. Overseas, the Vietnam War raged on, and the streets at home roiled with race riots. With this tense political climate as a backdrop, Best of Enemies captures the legendary televised debates between ideological opposites Gore Vidal and William F. Buckley, Jr.

Dead last in the ratings, ABC hired Vidal and Buckley to debate each other during the Democratic and Republican national conventions. Buckley, who founded National Review magazine in 1955, was a leading light of the new conservative movement. Gore Vidal, lifelong Democrat and cousin to Jackie Onassis, was a leftist, taboo-smashing novelist and polemicist. Both believed each other’s political ideologies were dangerous for America. Like rounds in a heavyweight boxing bout, they pummeled each other with exchanges that devolved into personal attacks. These live and unscripted quarrels riveted viewers, and the television industry took notice.

Best of Enemies reveals the moment TV’s political ambition shifted from narrative to spectacle, forever altering the way the media — and Americans — talked about politics.

Allen Strickland Williams has performed stand-up comedy on CONAN. He was recently named one of Comedy Central’s Comics to Watch. One time, he got a standing ovation for telling a single joke. His featured on the Holy Fuck. Live Comedy. album. Illegally download it. He’s performed at South by Southwest, Moontower Comedy Festival, Funny or Die’s Oddball Comedy & Curiosity Festival, the Bridgetown Comedy Festival in Portland, CROM Comedy Festival in Omaha, Comedy Carnivale in Salt Lake City, Hell Yes Fest! in New Orleans, and the RIOT Festival right here in Los Angeles. He is one-fourth of the sketch group WOMEN, which has been featured on IFC.com’s Comedy Crib, Tosh.0 and L.A. Weekly’s 10 L.A. Comedy Acts to Watch. One interesting personal fact about Allen is that he likes having sex, because it feels good.