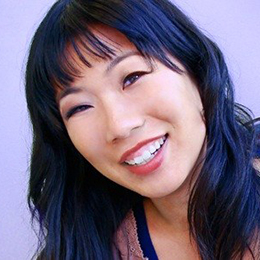 Paco Romane and George Chen sit down with comedian/artist Kristina Wong to discuss LO AND BEHOLD, REVERIES OF THE CONNECTED WORLD (2016). Along the way we learn about Kristina’s practice, rapping in Uganda, trolling Trump on twitter, and our relationship to technology.

Oscar®-nominated documentarian Werner Herzog (Grizzly Man, Cave of Forgotten Dreams) chronicles the virtual world from its origins to its outermost reaches, exploring the digital landscape with the same curiosity and imagination he previously trained on earthly destinations. Herzog leads viewers on a journey through a series of provocative conversations that reveal the ways in which the online world has transformed how virtually everything in the real world works – from business to education, space travel to healthcare, and the very heart of how we conduct our personal relationships.

Kristina Wong was recently featured in the New York Times’ Off Color series. She is a performance artist, comedian and writer who has created five solo shows and one ensemble play that have toured across North America and the UK. Her most notable touring show– “Wong Flew Over the Cuckoo’s Nest” looked at the high rates of depression and suicide among Asian American women and toured dozens of venues across the United States since 2006. She’s been a commentator for American Public Media’s Marketplace, PBS, Jezebel, xoJane, Playgirl Magazine, Huffington Post and a guest on Comedy Central’s The Nightly Show with Larry Wilmore, Totally Biased with W. Kamau Bell, Al Jazeera’s “The Stream,” and AM Tonight on Fusion TV. She’s been awarded residencies from the MacDowell Colony, New York Theater Workshop, Ojai Playwrights Festival, Montalvo Center for the Arts, Hermitage, and Atlantic Center for the Arts.