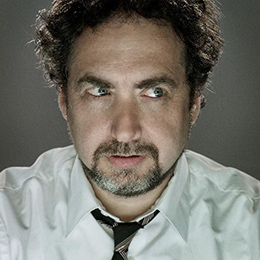 Part 2 of a 2-episode interview with Rodney Ascher. (Check out Part 1)

You wake up in the middle of night, unable to move and see a shadow standing over your bed. Is this a bad dream or something far more sinister? Was Kubrick’s The Shining more that just a scary movie? Director Rodney Ascher joins Paco Romane and George Chen on SUP DOC to talk about experiences with sleepwalking and sleep paralysis, among other topics. We learn about Rodney’s working process and influences, Stanley Kubrick’s museum exhibit, cinematic puzzles, and sifting through Andy Kaufman’s home recordings.

Room 237 is a subjective documentary that explores the numerous theories about the hidden meanings within Stanley Kubrick’s film The Shining (1980). The film may be over 30 years old but it continues to inspire debate, speculation, and mystery. Five very different points of view are illuminated through voice over, film clips, animation and dramatic reenactments. Together they’ll draw the audience into a new maze, one with endless detours and dead ends, many ways in, but no way out.

The Nightmare is a 2015 American documentary film directed by Rodney Ascher. The film had its world premiere on January 26, 2015 at the 2015 Sundance Film Festival and focuses on the topic of sleep paralysis. Ascher chose his subject because it had happened to him in the past. The Nightmare was produced by the team behind The Pact, Jiro Dreams of Sushi, and Academy Award® winning Undefeated, and it likewise debuted at Sundance where it was called The Scariest Movie of the decade” (Birth.movies.death) and “One of the scariest documentaries ever’ (Indiewire) before being released internationally. The Guardian’s Peter Bradshaw called it “The one film to watch this week.”

The documentary focuses on eight people suffering from sleep paralysis, a phenomenon where people find themselves temporarily unable to move, speak, or react to anything while they are falling asleep or awakening. Occasionally this paralysis will be accompanied by physical experiences or hallucinations that have the potential to terrify the individual. In the film, Ascher interviews each participant and then tries to re-create their experiences on film with professional actors.

Rodney Ascher is a filmmaker whose feature debut, the ‘subjective documentary’ Room 237 premiered at Sundance in 2012 before screening at festivals around the world including Cannes, London, the Vienalle,  Sitges, Toronto, and New York. The microbudgeted feature was rated by Entertainment Weekly’s Owen Glieberman as one the 5 best films of the year,  and Chuck Klosterman wrote “It obliterated my cranium.” At Fantastic Fest he won the Best Director (documentary) award and the International Documentary Association gave him Best Editing honors.

His other projects include a GIF-based music video for the band Clipping (featuring Hamilton’s Daveed Diggs), a chapter of  the anthology film ABC’s of Death 2, editing Andy Kaufman’s posthumous (?) comedy album, Andy and His Grandmother, producing and editing Room 237 producer Tim Kirk’s The Terror of Frankenstein: Director’s Commentary, as well as countless short films including the infamous The S From Hell. He lives in a fast-gentrifying neighborhood in Los Angeles with his talented wife, a beautiful cat, and a six year old boy with a special interest in the sinking of the Bismarck.
(The Kubrick exhibition that we mention from LACMA is in San Francisco at the Contemporary Jewish Museum until Oct 30th!)