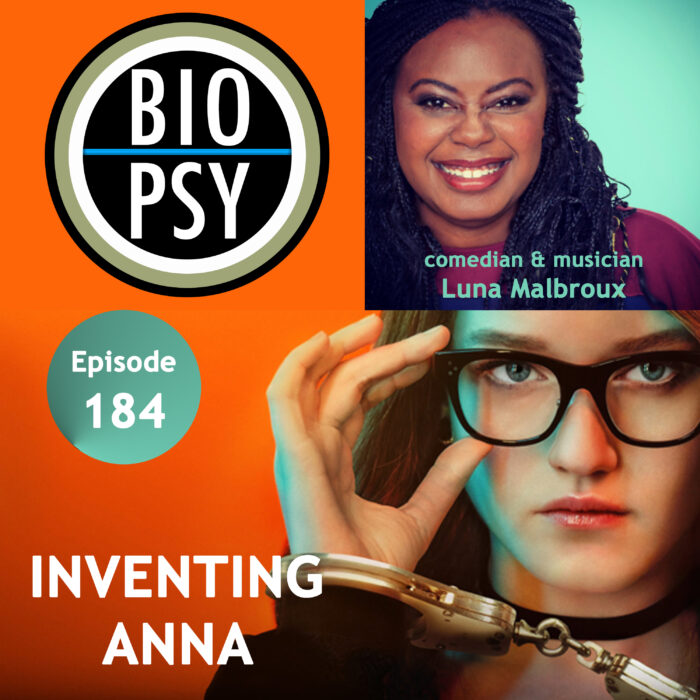 This is one of our BIOPSY episodes where instead of a documentary, we watch a ripped-from-the-headlines fictional account of a true story.

Today we’re covering the Shonda Rhimes Netflix hit Inventing Anna, the story of Anna Sorokin, who went by Anna Delvey. Sorokin/Delvey was convicted of larceny in 2019. She rose through New York’s social strata and convinced many institutions and people to loan her money with a fake German heiress backstory, and this nine part miniseries dramatizes the saga with Julia Garner playing Delvey.

Our guest is comedian and musician Luna Malbroux, who fuses her experience as a skilled facilitator and educator of justice, equity, inclusion, diversity in all of her creative endeavors. She works in a number of genres from turning the documentary experience Mapping Privilege into an award winning play, How to Be A White Man, To blending jazz, comedy, and storytelling with her band, The Moon and The Man. Luna has been featured on NPR, PBS, AJ+, Glamour Magazine, The Atlantic and more. She is also chief vibe officer of Joy Channel, an org that brings together creatives and change agents to transform culture.