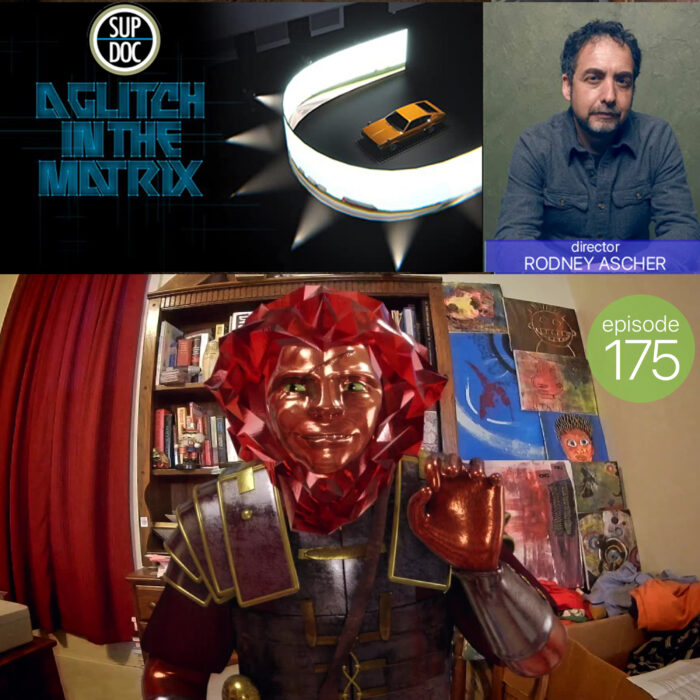 George talks to the filmmaker Rodney Ascher, whose latest doc is A GLITCH IN THE MATRIX. We’ve had Ascher on the show before to discuss his inventive genre-bending docs Room 237 and The Nightmare.

The soundtrack score by composer Jonathan Snipes just came out on vinyl from Deathbomb Arc.

You can rent the film or watch it on Hulu.

Rodney Ascher is a filmmaker known for creating documentaries that explore the subjective experience, freely appropriating the vocabularies of genre, experimental, and found-footage films along the way.

His first feature, 2012’s ROOM 237 looked at the Shining through the eyes of five very different people. It premiered at Sundance, went on to play Cannes and the NYFF before screening at over 30 festivals and being released theatrically all over the world despite the fact that the film was largely made on his home computer at night and on weekends on a budget in the low three figures (before legal fees.)

His follow-up, THE NIGHTMARE was called The Scariest Movie of the decade” (Birth.movies.death) which might be overstating it, but looked great on the poster.

Other Projects include a GIF-centric music video for the Hugo-nominated hip-hop band CLIPPING, editing Andy Kaufman’s posthumous (?) comedy album, ANDY AND HIS GRANDMOTHER (Drag City) from a newly unboxed archive of 80+ hours of cassette recordings the comedian made in the late 1970s and a short film about a sound effects record featuring Noah Segan and Leon Vitali.

Last year he premiered THE EL DUCE TAPES (with co-directors David Lawrence and Ryan Sexton) at Hot Docs and the BFI/London Film festival. The film focused on the notorious lead singer of the 2nd most offensive rock band of the 1980s and 90s was made almost entirely from archival footage shot on a VHS camcorder.

A GLITCH IN THE MATRIX is his new film, and it uses multiple styles of 3D animation to illustrate the experiences and philosophies of people who suspect the world itself is not quite real.

Having grown up in Boston and Florida (where he graduated from the University of Miami) he now lives in the northeast edge of Los Angeles with his talented wife, a beautiful cat, and a ten year old with an interest in extreme hot sauces.