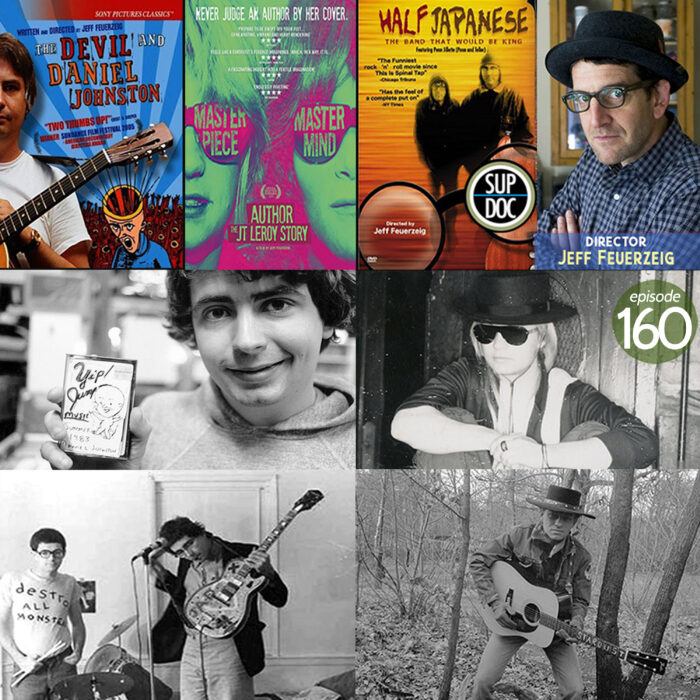 On episode 160 host Paco Romane and George Chen talk with one of their favorite filmmakers Jeff Feuerzeig. Jeff’s filmography speaks for itself but some of our favorite documentaries that we also discuss with Jeff are: The Devil and Daniel Johnston, Author: The JT Leroy Story and Half Japanese: The Band That Would Be King. All three of these documentaries are masterpieces in their own right with The Devil and Daniel Johnston  appeared on many best of the decade lists. It was named by Mojo Magazine one of the 10 best music documentaries of all time and by Rolling Stone magazine one of the Top 25 music DVDs of all time and Jeff was awarded the Directing prize for Documentary at the 2005 Sundance Film Festival.

Jeff Feuerzeig is an award winning director and non-fiction filmmaker whose feature film The Devil and Daniel Johnston won top documentary directing honors at the 2005 Sundance Film Festival and was distributed theatrically by Sony Pictures Classics. The film, which has developed a large cult following, is a compelling portrait of a schizophrenic musician and outsider artist who overcame his private demons — many of them quite literal in the subject’s own mind — to develop an avid international following. Combining techniques drawn from the documentary canon (Feuerzeig has worked with Albert Maysles, and others) and the New Journalism of the 1970s (the creation of first-person POV and internal monologue through audio cassette letters, journal entries, home movies, etc.), the film presents one of the finest portraits available of what writer and clinical psychologist Kay Redfield Jamison has labeled the artist “touched with fire,” and the connective tissue that links genius to madness.

Jeff is currently working on a new documentary about The Legendary Stardust Cowboy.