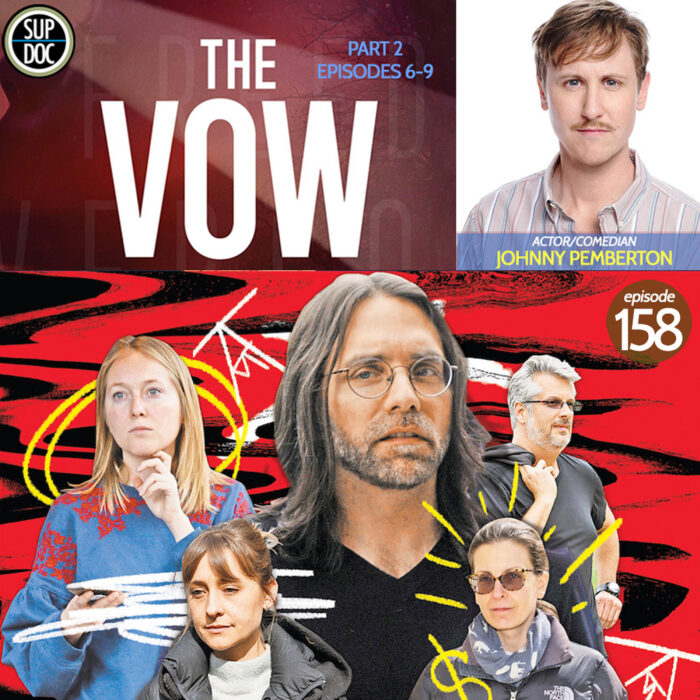 Today we wrap up the docuseries THE VOW on HBO, the story of the whistleblowers who left the cult group NXIVM, started by “the smartest man in the world” Keith Raniere. We are again joined by the very funny comedian Johnny Pemberton, who loves cult-leader stories.

Directed by Jehane Noujaim (Control Room, The Square) and Karim Amer (The Square, The Great Hack), this film relies on insiders revealing their own stories along with hours of archival footage. Get to know players like Frank Parlato, Cathering Oxenberg, the two Tonis, and watch George and Paco strain their empathy.

We are covering episodes 6 through 9 of the series. It was recently announced there will be a second season. The first 5 episodes focused on Sarah Edmondson and Mark Vicente, high-level leaders who left Raniere’s organization and went to the press with their discoveries. You can hear our take on Part 1 episodes 1-5 with Johnny here.

Johnny Pemberton is a comedian, actor, writer, mildly knowledgeable gardener, reggae enthusiast, and friend to both insects and mammals.

Johnny is a nationally touring comedian and host of the vanguard podcast “LIVE to TAPE” on Starburns Audio. He was born and raised in Rochester Minnesota. He lives in Los Angeles.