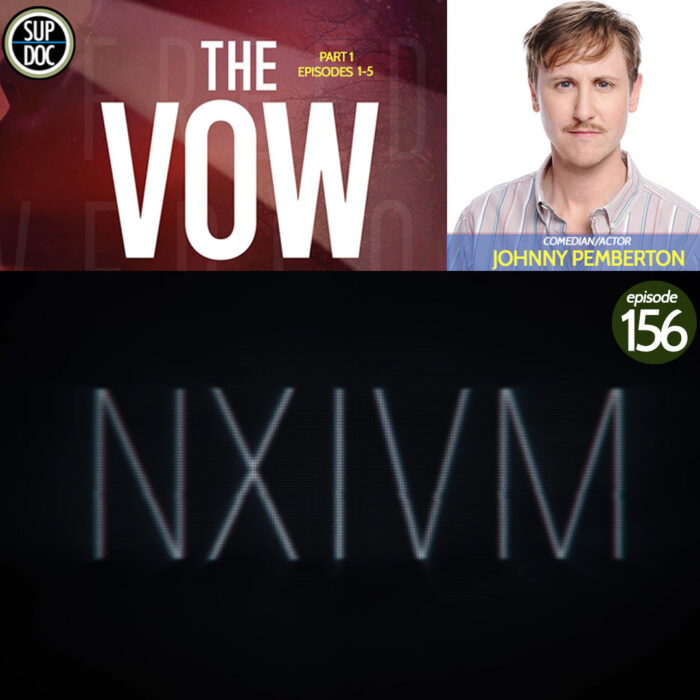 Ep 156 THE VOW with comedian and actor Johnny Pemberton

Actor and comedian Johnny Pemberton (Ant Man, Son of Zorn) joins us to talk about the insane true-crime documentary The Vow. In this part 1 of 2 shows, we recap episodes 1-5 as HBO unveils them on a weekly basis (no binge watching for us. Old school). There are 9 episodes in total and we will be visiting episodes 6 thru 9 at a later date.

The Vow, a nine-part docuseries directed by Jehane Noujaim and Karim Amer, documents the NXIVM (pronounced “Nixium”) organization, and how the founders attracted followers with their scientific-based approach to self-help, and how Raniere and actor Allison Mack were arrested on sex trafficking and racketeering charges. The directors of The Vow use extensive amounts of NXIVM training materials and inspirational videos to paint a picture of founders Keith Raniere and Nancy Salzman. They interview a number of former members, most notably Mark Vicente, the director of the documentary What The Bleep Do We Know? and actress Sarah Edmondson. Both have reached advanced levels in the organization and were close to both Raniere and Salzman. “It was never my intent to destroy the organization,” Vicente says in a self-made video he made after he left the organization. “It’s just that I saw what was going on. And what I saw fucked with my head.”

Johnny Pemberton is a comedian, actor, writer, mildly knowledgeable gardener, reggae enthusiast, and friend to both insects and mammals. Johnny is the voice of ‘Peanut’ on the Disney XD show “PICKLE AND PEANUT”. He can be seen in the films “21 JUMP STREET” “22 JUMP STREET” “NEIGHBORS 2” “THE WATCH” “ANT MAN” “BAND OF ROBBERS” “THE 4th” “ACTION POINT” “TONE DEAF” and Armando Ianucci’s Oscar nominated film “IN THE LOOP”. He plays ‘Bo’ on NBC’s “Superstore”, ‘Max’ on season 4 of FXX’s “You’re the Worst”, and ‘Alangulon’ on the FOX series “Son of Zorn”.

Johnny is a nationally touring comedian and host of the vanguard podcast “LIVE to TAPE” on Starburns Audio. He was born and raised in Rochester Minnesota. He lives in Los Angeles.