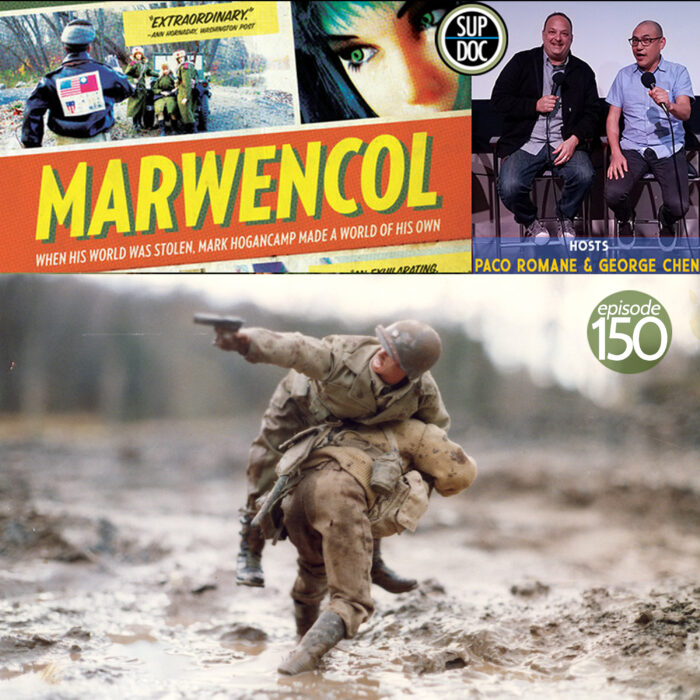 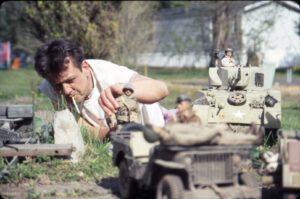 Episode 150! We’re commemorating by taking a look back at one of our favorite documentaries, the 2010 Jeff Malmstein documentary Marwencol. Mark Hogancamp, a resident of the Catskills who once made his living designing and building showrooms for trade shows. In 2000, while drinking in a bar, he told a group of men that he enjoyed wearing women’s shoes. The men, five in number, responded to his candor by beating him nearly to death.

After waking from a coma, he had lost his memory and had to relearn how to walk. Once his Medicare benefits ran out, he began building a miniature city, complete with dolls in costumes, and photographing the adventures. They take place in World War II Belgium, and center around one male U.S. Army Captain, and the attractive women with whom he fights Nazis, who tend in this world to attack in groups of five.

Malmberg frames the unfolding melodrama in tight close-up, with period tunes enhancing the bygone mood. Hogancamp’s photographs of his mini-world interest an inquisitive neighbor, who urges the hesitant backyard mastermind toward art-journal publication. The resulting series of events stirs up anxieties concerning not only Hogancamp’s privacy and post-trauma wariness but also, in a matter-of-fact revelation an hour into the film, a facet of his personality that relates to his beating.

Unpredictable and absorbing, “Marwencol” poses penetrating questions — about art, outsider status, the mysteries of the human brain and the possibility of second chances — all while circling, ever closer, an unforgettable individual and the unknowable creative impulse.

This is a story about hate crimes, feeling comfortable in your own shoes, art therapy, and time-traveling witches!

Marwencol has a 98% rating on Rotten Tomatoes while its biopic adaptation “Welcome To Marwen” starring Steve Carell has only 35%.