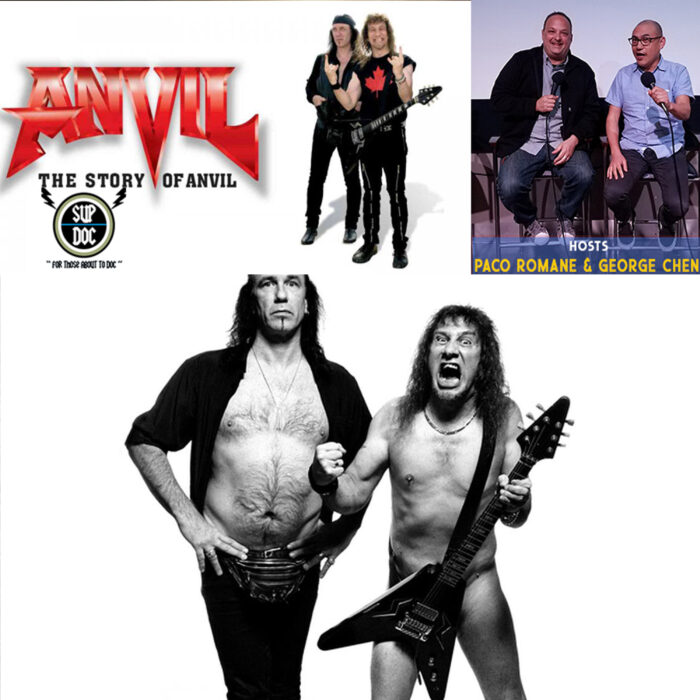 On episode 149 of Sup Doc we are recapping the classic 2008 documentary Anvil! The Story of Anvil directed by Sacha Gervasi who was a teenage fan and Anvil roadie. This doc is tragic, brilliant and hilarious and is as close to the real life Spinal Tap as possible and even involves a player named Robb Reiner. Canadian heavy-metal band Anvil delivered an influential 1982 album that inspired the likes of Anthrax and Metallica. Then they dropped off the map and spent decades of toiling in obscurity. The doc centers around guitarist Steve “Lips” Kudlow and drummer Robb Reiner as they stumble through a European tour and reflect on failure, friendship, resilience and following an impossible dream.

“Anvil! The Story of Anvil” is a documentary about the rise and long, long fall of their band, where other members of the band quickly faded away, but Lips and Robb rocked on. “How many bands stay together for 30 years?” asks Slash of Guns N’ Roses, in a backstage interview. “You’ve got the Stones, the Who, U2 — and Anvil.” Yeah. And Anvil.

Anvil had one “kind of” successful album (“Metal on Metal”), but is credited as having a lot of influence on lots of heavy metal bands. However their story is not unique to the music industry as they also had bad management, lousy record labels and are Canadian. “I was raised to be polite,” says Lip, after he fails at a job in telemarketing.

Their wives are loyal but not overly thrilled with Anvil’s prestige as down and down it fell. They get the veteran producer Chris Tsangarides to produce their 13th album but have to release it themselves. One CD finds its way to Japan, and they are invited to a Tokyo concert in a venue seating (an ominous omen) 10,000. They play at the un-heavy-metal hour of 9:45 a.m. How many people turn up? Watch the doc to find out!

Anvil: The Story of Anvil has a 98% rating on Rotten Tomatoes and should be on everyone’s Best Of documentary list. It’s currently streaming on Amazon Prime.