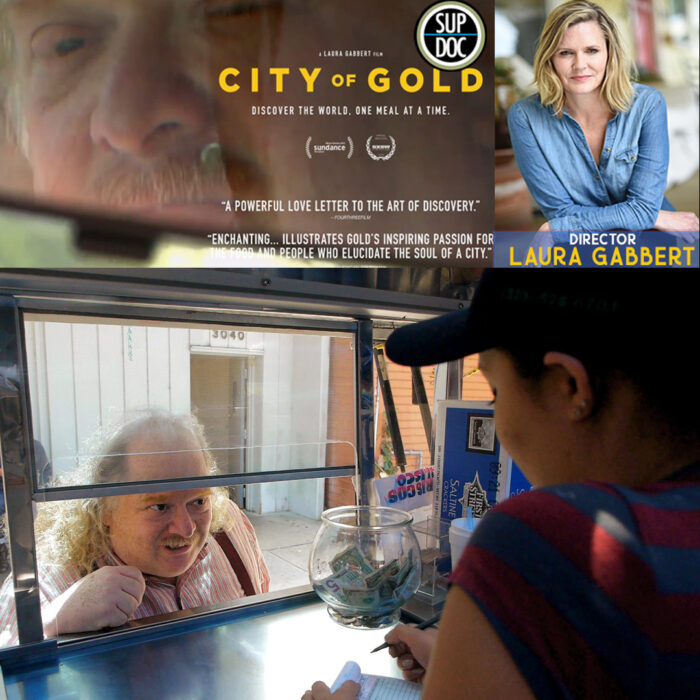 We roll on with our fifth anniversary and Munchie May, our food documentary theme month.
Our guest is the director of our favorite ever food documentary, City of Gold. Filmmaker Laura Gabbert joins the show to talk about the film and the legacy of the late Jonathan Gold. Jonathan Gold was the Pulitzer Prize winning food critic who came up through LA Weekly, music journalism, and being a cellist in noise bands. City of Gold chronicles his career, life as a family man, and his love for the diverse cultures and flavors of Los Angeles.

Documentary director Laura Gabbert’s critically acclaimed films deploy full measures of humor and drama to unflinchingly put a human face on a range of social and cultural issues. NO IMPACT MAN (Sundance ’09), which the LA Times called “terrifically entertaining, compelling and extremely funny,” played theatrically in over 30 cities. Her previous film SUNSET STORY (PBS) won prizes at Tribeca and LAFF. About it, the New York Times wrote, “Sunset Story may break your heart, but it will also make your day.” Gabbert directed the feature film CITY OF GOLD (Sundance 2015) about Pulitzer Prize winning food writer Jonathan Gold. The film played theatrically in over 50 markets. About it, the New York Times wrote “the film does as much to demystify and yet romanticize Los Angeles as any Chandler novel.” Vogue Magazine included CITY OF GOLD in their list of the “the 60 best documentaries of all time.” In 2017 Gabbert was a director on the Netflix show UGLY DELICIOUS and directed the Field of Vision short film MONUMENT | MONUMENTO about a unique spot on the US-Mexico border. Most recently, she directed the feature documentary OTTOLENGHI AND THE CAKES OF VERSAILLES about a collaboration between chef Yotam Ottolenghi and the Metropolitan Museum of Art. She is currently co-directing the seven-part non-fiction series THE POWER OF FILM based on the lectures of legendary film scholar Howard Suber. Most recently, Gabbert is working on a Covid-19 food supply chain documentary, collaborating with author/editor, Ruth Reichl.

This episode we shout out our friends at Chelsea Got Cakes!

(We also covered this doc a few years ago before Gold passed away with Karl Hess.)