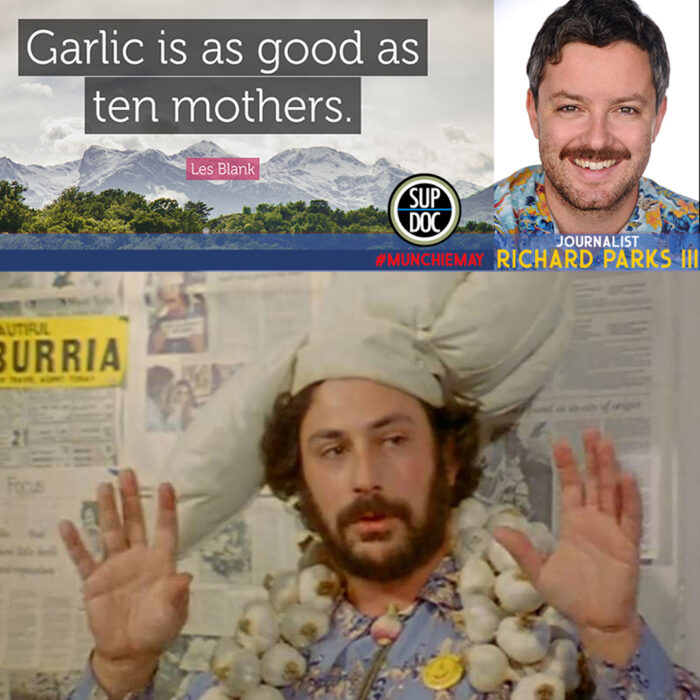 This is our Munchie Mayseries on food documentaries.

We watched Les Blank’s 1980 classic film Garlic Is As Good As Ten Mothers with journalist Richard Parks III. Blank celebrates the virtues of garlic from Berkeley’s Chez Panisse to the Gilroy Garlic festival. It’s a short but thorough look at the cultural stereotypes and medicinal qualities of the stinking rose, down the supply chain of farm workers. This doc was picked by our guest, Richard Parks the Third, a James Beard Award-nominated writer, filmmaker, cookbook author, and the host of Richard’s Famous Food Podcast. Richard is the co-author of the Guerrilla Tacoscookbookand The Boba Book. He’s written for Lucky Peach, the New York Times, the Los Angeles Times,and produced radio stories for Snap Judgement, KCRW’s Lost Notes, and McSweeney’s, where he collaborated with The Flaming Lips’ Wayne Coyne.

Richard also teaches us how to Spatchcock a chicken!

This episode we shout out our friends at Hoppin Hot Sauce!