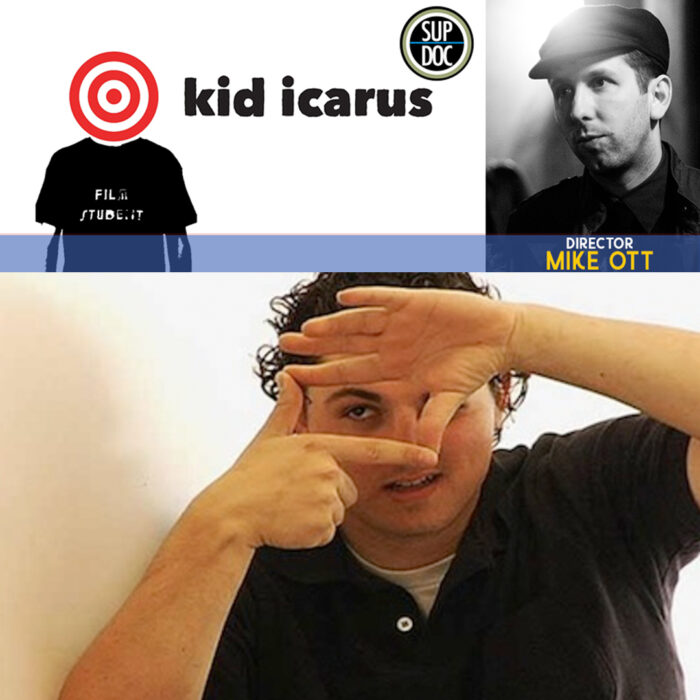 In 2007 Mike Ott was starting his first teaching job as a film professor at a community college in Southern California. There he meets a bafflingly confident 18-year-old Leigh Harkrider, who thinks his student film, “Enslavence” is going to send him to stardom.

Together with Carl Bird McLaughlin, Mike follows Leigh’s attempt to put his vision in action. Along the way we meet characters that  feel like they came from a Christopher Guest mockumentary. There’s the spazzy vulnerability of Cory Zacharia, the loyalty of put-upon Cory Rubin, and some form of accountability from stoner elder Phil Zeigler.

Leigh is filled with youthful hubris, but the film might come off as mean without his redemptive arc.  Kid Icarus is like a spiritual sequel to American Movie. Mike tells George all about the process making it and the long road to its digital release. You can watch Kid Icarus on Amazon Prime and Kanopy.

Mike Ott studied under Thom Andersen at Cal Arts where he received his MFA degree in Film/Video. His latest film, California Dreams (2017), premiered at Berlin Critics Week and in the US at SXSW. Mike’s films have won numerous awards including, an Audience Award at AFI Fest, a Gotham Award and an Independent Spirit Award. Mike lives part time between Los Angeles and Berlin with his wife Isolda Dychauk.