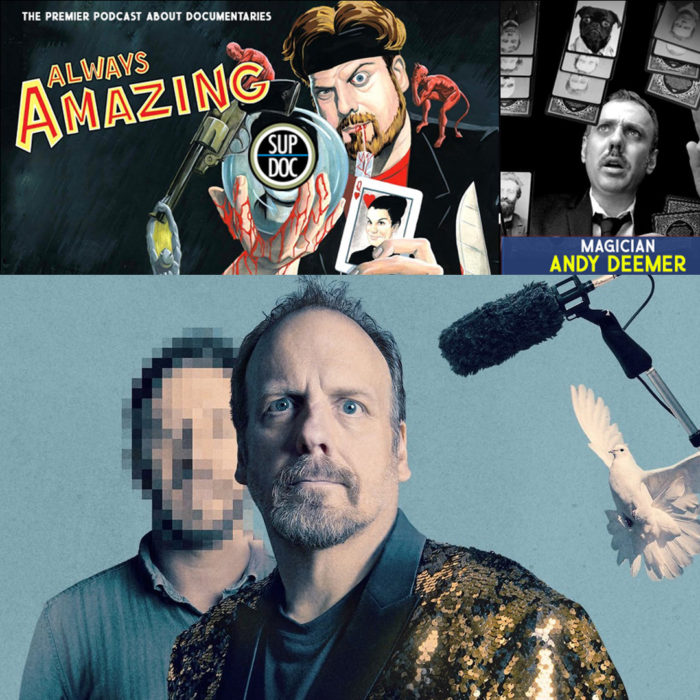 Paco and George are joined by magician Andy Deemer to discuss both of The Amazing Johnathan documentaries out now: Always Amazing (Steve Byrne 2018) from All Things Comedy and The Amazing Johnathan Documentary (Ben Berman 2019) on Hulu. Not since the Fyre Festival have we had such a head-to-head battle of docs!

Whether sawing into his arm with a butcher’s knife or pulling pranks with audience members, The Amazing Johnathan was a reliable source of manic energy at many an ’80s and ’90s stand-up show. The Amazing Johnathan described himself as the “Freddy Krueger of Comedy,” and he used that manic energy to regularly catapult his way onto comedy shows like Late Night With David Letterman and Comic Strip Live, and his gory, smart and silly deconstructions of magic and coked-up circus geek tricks eventually earned him Las Vegas headlining gigs for a decade or longer. Then, in 2014, he announced that he’d been diagnosed with a serious heart condition, saying doctors had given him only a year to live. The Amazing Johnathan retired, seemingly destined to fade into the annals of cult comedy and the memories of ’80s kids who watched too much cable. But then came the kicker: Johnathan kept on living. And after a while, he grew bored and anxious to return, even if it meant dying on stage. Literally. And this is where both documentaries pick up the story. And the story of the two competing documentaries become a story within the story.

Andy Deemer has been a screenwriter, magazine editor, product manager, and now Macaulay Culkin’s personal Magician. We learn all about Andy’s crazy lives while also getting to the bottom of the Berman Vs. Byrne controversy, documentary ethics, and behind-the-scenes info on Jonathan’s condition.