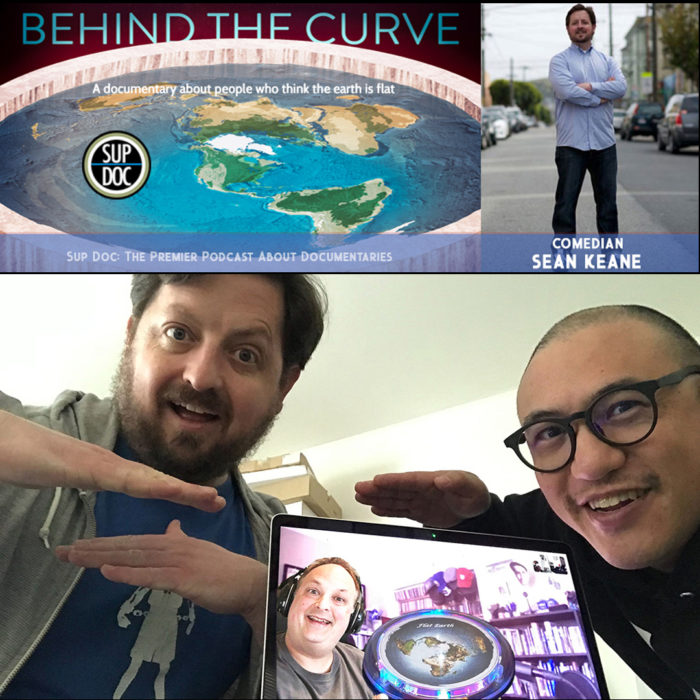 Ep 113 BEHIND THE CURVE with comedian Sean Keane

By Doc Fans. For Doc Fans

Ep 113 BEHIND THE CURVE with comedian Sean Keane

It’s our EARTH DAY special! This is perhaps our most important episode so far. Hosts Paco and George tackle BEHIND THE CURVE about Flat Earth believers. As flat Earthers face universal contempt and mockery, director Daniel J. Clark takes steps to humanize flat Earth theorists. Our guest is the hilarious and truth-bomb thrower comedian Sean Keane (“Another Period,” “Billy On The Street,”). We hold a mirror up to the truth to see if it’s still breathing. You’ve been warned.

It seems these days we are hearing more and more about people that believe the Earth is flat. Not because of scientific evidence or empirical data, but because of their perception of the Earth. Why is the horizon flat? If the Earth is spinning at 1000 miles per hour, why don’t I feel it? Why would I believe the round Earth propaganda of the deceitful world order? These are the questions that trouble flat-earthers. While it would be easy to make a documentary that mocks and easily disproves flat-Earthers, Behind the Curve, does more than that by allowing us to watch a like minded-community.

Behind the Curve doesn’t seek to disprove the flat Earth theory, mainly because it disproves itself. Rather, it focuses on the lives of Flat Earth theorists, delving deep into different aspects of narcissism, self-worth, and community acceptance.

Sean Keane has written for “Another Period,” “Billy On The Street,” and Audible, and produced an episode of “The Comedy Show Show” for Seeso. He’s performed in festivals like Bridgetown, RIOT LA, and SF Sketchfest, and his writing has appeared in ESPN the Magazine, McSweeney’s, and Yardbarker. In 2014, the SF Bay Guardian named him the best comedian in San Francisco, then immediately went out of business.