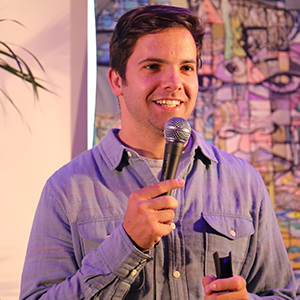 Restrepo is a 2010 American documentary film about the Afghanistan war, directed by American journalist Sebastian Junger and British photojournalist Tim Hetherington.
The film explores the year that Junger and Hetherington spent in Afghanistan on assignment for Vanity Fair. The 2nd Platoon is depicted defending the outpost (OP) named after a platoon medic who was killed earlier in the campaign, PFC Juan Sebastián Restrepo, a Colombian-born naturalized U.S. citizen.

Jeff Dean is a San Francisco-based comedian, writer, and actor originally from Reno, Nevada. Over the years, he’s become a staple in the Bay Area Stand Up comedy scene. He currently runs two weekly comedy showcases, The Fun Stuff at The Laundry in San Francisco, and Double Standard Comedy Night at Double Standard Brewery in Oakland.

If documentaries are meant to change hearts and minds, that’s exactly what Sebastian Junger’s “Restrepo” has done for Jeff. Since seeing this doc, Jeff has grown a deep empathy for our nation’s veterans, and decided to produce benefit comedy shows raising money for non-profits benefiting veterans experiencing homelessness. This partnership lead a much bigger life change, as he switched careers, quitting sales to join a non-profit providing direct service to people experiencing homelessness. Jeff’s life has changed quite a bit, and while there were many factors that lead to these decisions, none of them would have been made without the decision to watch “Restrepo” along with the follow up documentary “Korengal”.