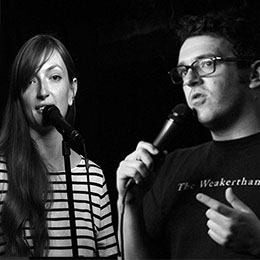 Ep 14 THE WOLFPACK with comedians Dave Ross and Anna Seregina

Ep 14 THE WOLFPACK with comedians Dave Ross and Anna Seregina

Paco Romane and George Chen welcome Anna Seregina and Dave Ross to the Sup Doc living room. They discuss the much hyped documentary The Wolfpack. The Wolfpack is a 2015 American documentary film about a family who homeschooled and raised their seven children in the confinement of their apartment in the Lower East Side of New York City.

Locked away in an apartment in the Lower East Side of Manhattan for fourteen years, the Angulo family’s seven children—six brothers named Mukunda, Narayana, Govinda, Bhagavan, Krisna (Glenn), and Jagadesh (Eddie), and their sister Visnu—learned about the world through watching films. They also re-enact scenes from their favorite movies. They were homeschooled by their mother and confined to their 16th-storey four-bedroom apartment in the Seward Park Extension housing project. Their father, Oscar, had the only door key and prohibited the kids and their mother Susanne from leaving the apartment except for a few strictly-monitored trips on the “nefarious” streets.
Everything changed for them when 15-year-old Mukunda decided to walk around the neighborhood in January 2010, against their father’s instruction to remain inside. All the brothers then decided to begin exploring Manhattan and the world outside.

Dave Ross is a stand-up comedian in Los Angeles. Sometimes his comedy is vulnerable and personal. Other times his comedy is loud, stupid and about butts. You can find him stumbling around L.A. and the country, performing at every festival, club, theater, bar, fire hall or bombed-out stone building that will have him. He’s in a sketch group called WOMEN that makes sketches for Comedy Central and IFC’s Comedy Crib. He hosts the podcast Terrified on the Nerdist Network. He won a MOTH Grand Slam, he got interviewed on WTF with Marc Maron, and he told a story on Comedy Central’s Drunk History. He likes his cat. His cat’s dope.

Anna Seregina is a stand-up comic and performer, described as having the “worst aura.” She was named a “Comic to Watch” by the SF Weekly. She produces the Los Angeles branch of the long-running SF show “the Business.” She is a co-host of “Terrified with Dave Ross,” part of the Nerdist network. She has appeared in comedy festivals (RIOT LA, SF Sketchfest, Bridgetown, Sacramento, Crom, SF Comedy Day, SF Comedy & Burrito), hosted music festivals (Panache’s Bruise Cruise, Phono del Sol), told stories at storytelling events (the Moth, Porchlight), and done weird things publicly (SF MoMA, Artists’ Television Access, SFAI, Public Access TV). She starred in Joey Izzo’s “Stepsister,” which screened at Cannes, San Francisco International, and Traverse City film festivals in 2013. Most facts about her are true. Most truths about her are facts.

Produced by Will Scovill. Music by David Seigel