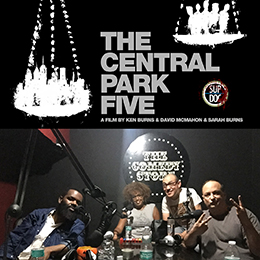 Part 3 of our True Crime month of MAYhem 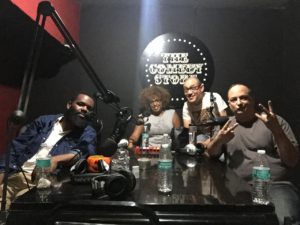 We conclude our MAYhem Month of True Crime docs! The Central Park Five doc looks at the wrongful convictions of 5 innocent teens. Did you know Donald J Trump took out a full page ads about the Central Park Five? “Muggers and murderers,” he wrote, “should be forced to suffer and, when they kill, they should be executed for their crimes.” Though he didn’t refer to the teenagers by name, it was clear to anyone in NYC that he was referring to them.

Paco and George recap CENTRAL PARK FIVE with Kaseem Bentley and Lauren Stanton. We get into Trump, false accusations, and American injustice. Special thanks to The Comedy Store and Mike Schmidt for engineering and recording time.

The Central Park jogger case involved the violent assault, rape, and sodomy of Trisha Meili, a female jogger, in New York City‘s Central Park, on April 19, 1989. The attack left her in a coma for 12 days. Meili was a 28-year-old investment banker at the time, weighing under 100 pounds. The New York Times described the attack as “one of the most widely publicized crimes of the 1980s.”

Sarah Burns, the daughter of documentary filmmaker Ken Burns, worked for a summer as a paralegal in the office of one of the lawyers handling a lawsuit on behalf of those convicted in the case. The documentary was inspired by her undergraduate thesis, which was on the topic of racism in the media coverage of the event.

The documentary provides background, interviews, expert analysis, and details of associated facts related to the case and the conviction of five suspects. It presents analysis to suggest that the police should have connected Matias Reyes, who eventually confessed to the crime, to the case at the time that it happened. DNA evidence identified him as the sole contributor of the semen found in and on the rape victim.

The five convicted juveniles sued New York City in 2003, nine years prior to the release of the documentary, for malicious prosecution, racial discrimination, and emotional distress. Ken Burns said he hoped the film would push the city to settle the case against it. The city settled the case for $41 million in 2014, after Bill de Blasio became mayor. As of December 2014, the five men were pursuing an additional $52 million in damages from New York State in the New York Court of Claims.

Kaseem Bentley‘s no-holds-barred style commands your attention even when the check is dropping. Currently he doesn’t have an agent, manager, or a million Twitter followers, but club bookers still take a chance on him. Kaseem has appeared on Viceland, NBC SeeSo, KQED, and Rooftop Comedy, and was named one of SF Weekly’s Comics To Watch.