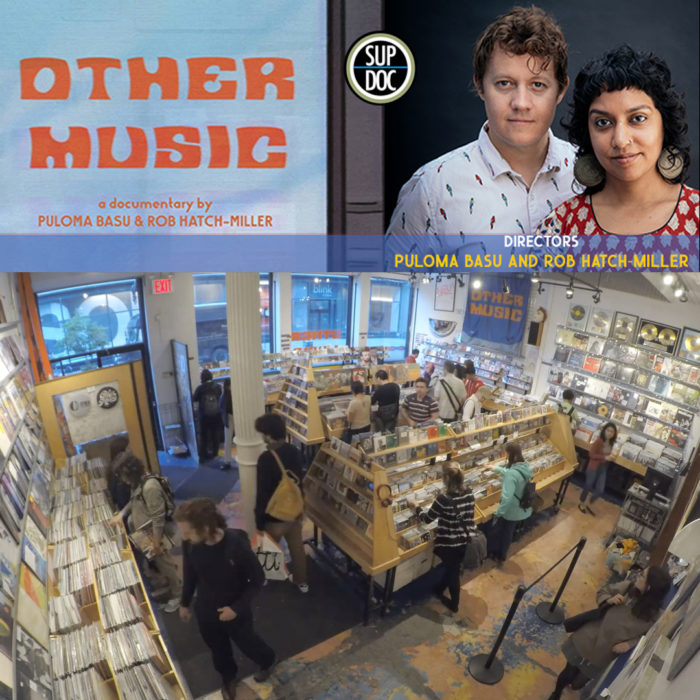 George Chen spoke with directors Puloma Basu and Rob Hatch-Miller about their 2019 film, Other Music.

Other Music was a record store in New York for twenty years and a played a central role in the life of the city’s music scene. The store closed in 2016 and this documentary captures the last month and a half of the store’s activity, with former employees, fans, and musicians all showing up to pay their respects. There are interviews and guest appearances from Martin Gore of Depeche Mode, Jason Schwartzmann, Regina Spektor, William Basinski, Tunde Adebimpe, Cornelius, and Benicio Del Toro. More than the famous talking heads, this feels like a vital reminder of the before-times, a celebration of community.

The film’s release plans had to be altered with the COVID19 quarantine, so instead Other Music has a special online release for a limited time starting April 17th. A “Virtual Cinema release” through Factory25, part of the profits are being channeled to record stores, book stores, movie theaters, and other retailers shuttered due the the pandemic. Each partner has a custom URL to rent through; find a store you want to support here!

Puloma Basu was born in Buffalo, NY and raised in Kolkata, India. She began her career in film working on Mira Nair’s The Namesake and has since worked on numerous TV shows including Bored To Death and Flight Of The Conchords and feature films such as St. Vincent and The Meyerowitz Stories. She and her husband Rob Hatch-Miller directed and produced season one of the standup comedy TV series Night Train With Wyatt Cenac for NBCUniversal’s digital platform Seeso. Together they’ve also directed music videos for artists including Sharon Jones & The Dap-Kings and Aimee Mann. This is Puloma’s first feature film as a director.

While studying Film & TV at NYU’s Tisch School Of The Arts, Rob Hatch-Miller began a life-changing job as a staff member at Other Music. Rob has worked on numerous documentary features including Laura Poitras’ The Oath and Eugene Jarecki’s The House I LiveIn. He directed and produced the soul music documentary feature Syl Johnson: Any Way The Wind Blows, which won the Best Documentary Jury Prize at the 2016 Sidewalk Film Festival and the Best Documentary Audience Award at the 2015 Indie Memphis Film Festival. Rob has also produced numerous music videos, an episode of Adult Swim’s Infomercials TV series and dozens of web comedy shorts for Funny Or Die including Hillary Clinton: Between Two Ferns With Zach Galifianakas

You can support Sup Doc on Patreon.