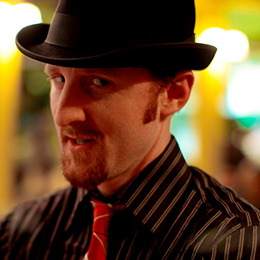 Paco Romane and George Chen are thrilled to have Jamie DeWolf on the podcast to talk about Going Clear: Scientology and the Prison of Belief. Jamie talks very candidly about Scientology, his Grandfather, family and religion. He is not only a story-teller, producer, director, writer, actor and impresario he is also the great grandson of L Ron Hubbard. We get into Scientology, his family, creativity and so much more! Going Clear was released on DVD and Blu-ray on Oct. 6, as well as on demand on Amazon Instant Video, Google Play, PlayStation, iTunes, Xbox and Vudu on Oct. 30. Watch it now and then join the conversation only on Sup Doc Podcast.

Review from Reddit: “Jamie DeWolf, the great-grandson of L. Ron Hubbard, quite accurately describes Scientology as “one of the most devious, systematic brainwashing systems that’s ever been invented”. That quote is worth remembering.

If you would like to read the full transcript of the interview you can do so here. We got a gift from the secretive group Anonymous thanking us for the interview.

UPDATED: January 20th 2016 “Tom Cruise Scared Of Scientology Expose By L Ron Hubbard’s Grandson”…Jamie DeWolf is making powerful people tremble & that is ALWAYS a great thing! Check out the article and the mention of EP16 with Jamie!

Going Clear: Scientology and the Prison of Belief is a 2015 documentary film about Scientology. Directed by Alex Gibney, it is based on Lawrence Wright’s book Going Clear: Scientology, Hollywood and the Prison of Belief (2013). Produced by HBO, the film premiered at the 2015 Sundance Film Festival in Park City, Utah. It received widespread praise from critics and was nominated for seven Emmy Awards, winning three, including Best Documentary.

The film deconstructs the church’s claims by presenting a condensed history of Scientology and its founder, L. Ron Hubbard, examining how celebrities interact with the church, and highlighting the stories of a number of ex-members and of the abuse and exploitation that they described seeing and experiencing. The Church of Scientology responded vehemently to the film, complaining to film critics about their reviews and denouncing the filmmakers and their interviewees.

Going Clear was released in a limited number of theaters on March 13, 2015 and aired on HBO on March 29, 2015. It was a major ratings success and by mid-April 2015 had attracted 5.5 million viewers, making it the second most-watched HBO documentary in the past decade. It was subsequently released internationally, showing in theaters and on television despite a sustained campaign by the Church of Scientology to block its release.

DeWolf is best known for his work as a filmmaker for Youth Speaks Bigger Picture Project, with the performance trio The Suicide Kings, hosting the monthly Tourettes Without Regrets at the Oakland Metro OperaHouse, and for his work as a producer and performer on NPR’s Snap Judgment. DeWolf has appeared on HBO’s Def Poetry, 60 Minutes, UPN, Inside Edition, and CBS. DeWolf directed, wrote and starred in the feature film Smoked. The Movie (2012). He is also the great-grandson of author and Scientology founder L. Ron Hubbard and an outspoken critic of the Church of Scientology. In 2000 he hosted the first ever anti-Scientology summit in Clearwater, Florida, which he continues to attend, and was a keynote speaker at the first international conference in Dublin, Ireland.

Formerly Jamie Kennedy, DeWolf took his mother’s maiden name in 2006 to avoid confusion with actor and fellow comedian Jamie Kennedy. DeWolf is the great-grandson of L. Ron Hubbard; being the grandson of Hubbard’s son Ronald DeWolf. DeWolf told the San Francisco Chronicle in 2001 that his mother and girlfriend were visited by Scientology agents, who asked about his comments on Scientology in his poetry and his appearance at a November 2000 benefit for the Lisa McPherson Trust in Clearwater, Florida. The poetry piece was titled “Judas’ Son”. Initially, the Scientology agents told DeWolf’s mother that they were fellow poets, but DeWolf later remarked, “My mom knew from the moment they started talking that they were Scientologists, which they admitted to.” DeWolf was quoted as saying, “They can’t shut me up.” In 2013 That same year he was quoted on The Young Turks as saying that Scientology is one of the most “devious, systematic brainwashing systems that’s ever been invented.” In 2014, DeWolf wrote and performed a story for NPR’s Snap Judgement which appeared on Upworthy and has to date received over a million views on Youtube.