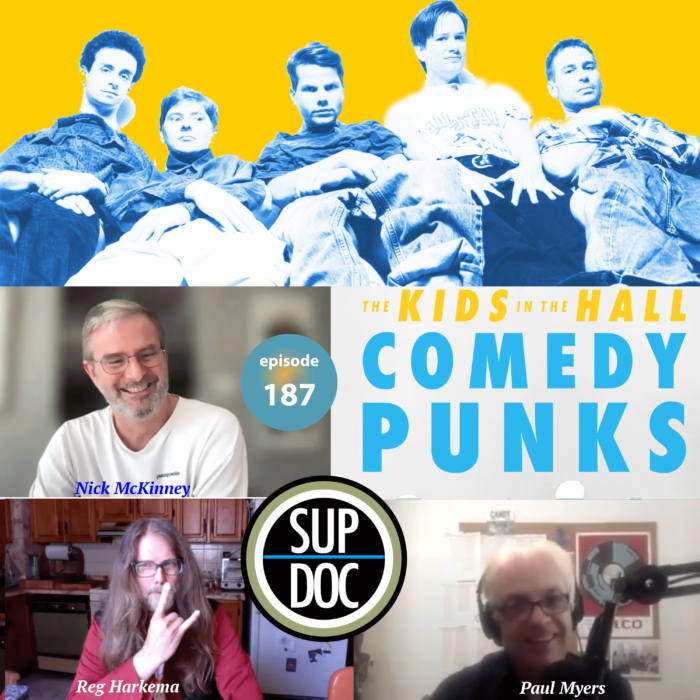 George is joined by the team behind the new Kids in the Hall documentary, director Reg Harkema and executive producers Nick McKinney and Paul Myers. Comedy Punks premiered at SXSW 2022 and is making its streaming debut on Amazon Prime on May 20th.

The Kids in the Hall: Comedy Punks spans four decades in the lives of the five-man sketch troupe who made a home in Toronto’s alternative nightclub scene and then blasted onto the television screens of the CBC and HBO.

The documentary is drawn from the critically acclaimed biography The Kids in the Hall: One Dumb Guy by Paul Myers, who serves as an executive producer. The documentary is produced by Nick McKinney (The Daily Show, The C Word, Insomniac with Dave Attell) and directed by Reg Harkema (Super Duper Alice Cooper, This is Pop). Executive Producers for Blue Ant Studios are Laura Michalchyshyn, Sam Sniderman, and Jennifer Harkness. Kim Creelman is producer. The doc features rare behind-the-scenes archival clips from the original The Kids in the Hall series, courtesy of Broadway Video Enterprises.

Harkema has an extensive editing background. He edited the classic hockey comedy Goon. An episode of Orphan Black that Harkema edited won Tatiana Maslany an Emmy. He edited 4 episodes and oversaw the completion of the first season of Condor.

Harkema won multiple awards for his “doc opera” Super Duper Alice Cooper, which he wrote, directed, edited and executive produced. He recently directed for Hail Britpop!, a documentary TV episode for Netflix about the mid-Nineties musical phenomenon . His documentary editing background includes Fix: The Story of An Addicted City, which directly led to the opening of the first safe injection site in Canada.

Harkema is developing a factual television show about vinyl record collecting called Wizard of Dig. He has a collection of over 2000 records and will take a reissue instead of an original if it’s mastered well from good sources.

Paul Myers is a musician and journalist from Toronto based in California. He is the producer/host of The Record Store Day Podcast, and author of books about The Kids In The Hall, Todd Rundgren, co-editor of Go All The Way, and Go Further.

Nick McKinney is an Emmy and WGA-nominated writer, producer, director and a co-founder of Honest Engine. Nick’s work lives principally in non-fiction film and television, with a focus on telling accessible, populist stories about politics, health, history, social issues and journalism. With a background that straddles both documentary and comedy, Nick’s work often brings humor and satire to his explorations of important current issues.