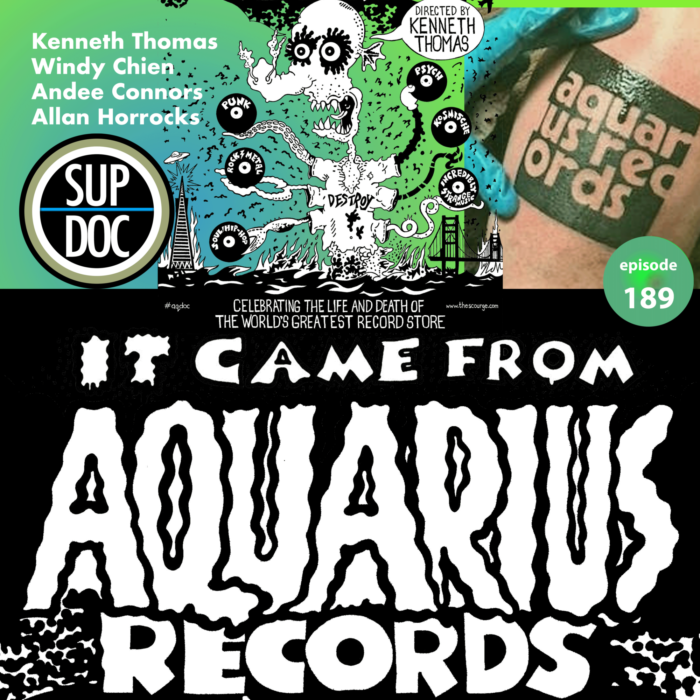 IT CAME FROM AQUARIUS RECORDS is a feature-length documentary about the SF-based independent record store, Aquarius Records. Having closed in 2016 after 47 years, this small apartment-sized store championed local, underground, independent, and challenging music to the masses – most memorably with their infamous bi-weekly, college essay-length, new-release lists.

Aquarius Records influenced and enriched countless peoples’ musical tastes with their curated selections – but this film also shows the realities of an indie record store trying to survive in an increasingly difficult market of brick-and-mortar music shops, especially in the ever-changing and price-gouging Mission District of SF. Six years in the making, the film has a very personal angle, with lots of behind-the-scenes footage (and drama) that shows both the joy and excruciating stress that comes with running — and closing — a store like this.

Film screening, followed by a moderated Q+A, with:

Jon Fine (Bitch Magnet, Author of Your Band Sucks: What I Saw at Indie Rock’s Failed Revolution (but Can No Longer Hear))

Kenneth Thomas is a teacher and filmmaker from Arcata, California. He has consistently worked in some aspect of news or documentary production. After graduating with his Bachelor’s Degree in 16mm Film Production from Boston University, he moved back to his hometown to work at the local CBS television station, where he quickly became the Technical Director, and then the Live News Director. He also served as their News Videographer, documenting stories on the front lines, like Earth First’s controversial fight to save the old-growth redwood forests.

After receiving his MFA in Film at San Francisco Art Institute, Kenneth completed his 5-year long film project, a feature-length music documentary called Blood, Sweat + Vinyl: DIY in the 21st Century. Featuring over a dozen multi-camera live concert shoots and 20 interviews about independent heavy metal music culture, the film has screened in over two dozen film and music festivals on every continent (except Antarctica) and is currently being independently distributed. This documentary led to him directing two music videos for bands in the film, one of which aired on MTV’s Headbanger’s Ball.

Artist Windy Chien is best known for her 2016 work, The Year of Knots, in which she learned a new knot every day for a year. Her work ranges in size from a knot that can fit in the palm of a child’s hand to room-sized installations that are sought after by private collectors. Following long careers at Apple and as owner of legendary music shop Aquarius Records, she launched her studio in 2015. Select clients include the National Geographic Society, the De Young Museum, Nobu Hotels, Google, and the Kering Group, and her work has been covered by Wired, The New York Times and Martha Stewart. Windy’s book about her work was published by Abrams in 2019.

Currently in Common Eider, King Eider, a ritualistic doom/drone duo, and My Heart, An Inverted Flame, another duo, heavy, droney, repetitive and shoegazey – only synths and drums!

He has radio shows on Gimmeradio.com called Battleflutes & Sideways Skulls, and Castle Weather on Repeater Radio in the UK. He shares his house (and life) with three cats called Tony Harrison, Lugburz and Tungsten.

Allan Horrocks did not get us a bio in time.

By This Wax I Rule

My Heart, an Inverted Flame